H has been back at work and I’ve been reasonably productive.  I was finally able to get on with my Father’s Day stuff.  I was really organised with the gift guide this time.  Put requests out early and chased up outstanding items.  Everything was in about two weeks ago except for one item.  I contacted them and they apologised and swore faithfully it would be in by the end of last week.  It wasn’t.  When I contacted them early this week, it was clear it hadn’t been sent.  I decided not to bother with them as I could hardly recommend them after all that.  Annoying though as I delayed my work for them and I’d turned down other similar items for the guide because I didn’t want to duplicate.  All done now though with my Father’s Day Gift Guide and I’m pleased with it.

This week I went to a blogging event in the city centre for a local beauty business: Dermoperfection.  It was a lovely event and I enjoyed chatting to a people who regularly get treatments – it was great to hear so many genuine testimonials. 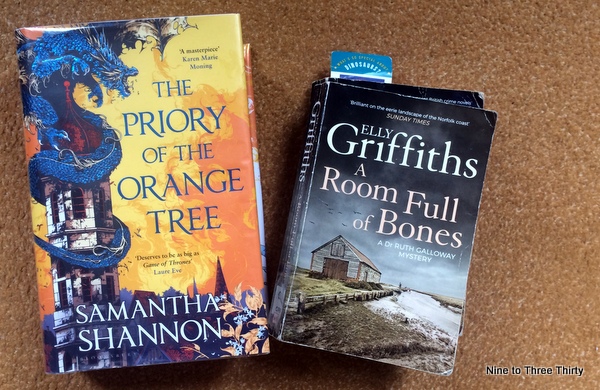 I’ve been doing a lot more reading lately.  When I was ill the other month I really got back into it and I’ve continued to read a lot.  The Dr Ruth Galloway books are the sort of book I read quite a lot of and I’m glad I’ve discovered a new series that I’m enjoying.  I found this series on a site that suggested other books you might enjoy if you’d read Ann Cleeves’ Shetland series.  They aren’t quite as good as those, but are very readable and I like the fact that a lot of the characters reappear and develop.

The Priory of the Orange Tree is a fantasy book.  It’s about 800 pages long and I was intrigued by it after I saw a picture of it shared on social media by Carole Finds Her Wings. She often shares pictures of books and writes about them too.  I don’t read huge amounts of fantasy novels, but I guess about once a year I read either a stand alone book like this one or I might try a series.  I really enjoyed this one, as it conjoured up a whole new world complete with maps and a glossary to explain various terms (mostly relating to medieval dress or weaponry).  I could barely put it down.  In fact, I’m thinking of trying some other books by the same author soon.