There’s something special and different about visiting an independent cinema as opposed to going to a branch of a big chain cinema.  Often they are in unusual or historic buildings and there’s usually a community behind them that makes going along to see a film a much more satisfying experience.  The choice of films is often a bit different too.  There’s more likely to be something a bit arty, or niche, or just a film created on a lower budget, but who knows it might be the first film of next big director or an early chance to see an actor that is going on to greater things.  You can even get the chance to suggest films or types of film and have an influence on future programming.  All in all a visit to an independent cinema is a great experience, and London is a good place to dip your toe into a new world of film.  You could even make a day out of it by combining a cinema trip with a indulgent foodie treat like the Montcalm London afternoon tea.

Crouch End’s Art House cinema opened in 2014 in a former Salvation Army Hall and is now established on the London arts scene.  More than just a cinema though, the Arthouse is a mix of the worlds of film, art, live music, theatre, dance, workshops, comedy, and more.  It’s inclusive too as there are sessions for parents with babes in arms; sensory impaired screenings; and special deals for the over 60s.

Portbello Road’s Electric Cinema is one of the oldest working cinemas in the country dating back to February 1911. The Electric has long been at creative hotspot. Back in the late 1960s and early 1970s, cinema enthusiasts turned it into art-house cinema. Today, viewers can enjoy leather armchairs with footstools or two-seater sofas or even oneof the six double beds in the front row.  The cosiness continues with snuggly cashmere blankets and there’s a choice of snacks and drinks from the fully-licensed bars.

The Lexi Cinema in Kensal Green is a boutique, independent cinema that’s housed inside a renovated Edwardian theatre.  As a charitable social enterprise it donates all its profits to charity, but the other great thing about it is that its community run and many of the friendly staff are volunteers.  That doesn’t mean it is short on comfort though as there’s comfy seating, a stunning sound-system and a cosy bar.

For me when I think of a cinema that Art Deco look that springs to mind.  Art Deco was at its height at the time of a great expansion for cinemas and many cinemas boast Art Deco features.  The Rio Cinema in east London opened in 1915. It now has Grade II-listed status having been designed by George Coles, the architect who would become a prolific creator of Art Deco cinemas and the Rio gained its Art Deco good looks when it was refurbished in 1937.

For a trip back into film history, try the Regent Street Cinema which is the birthplace of British cinema.  This is the location where in 1896, the Lumière brothers’ Cinématographe was first shown to a paying audience. In the interim it spent many years being used as a student lecture hall,  but more recently it was restored into a working cinema featuring a state-of-the-art auditorium. The cinema is one of the few in the country to show 16mm and 35mm film, as well as the latest in 4K digital film, so you will be able to see something different here. 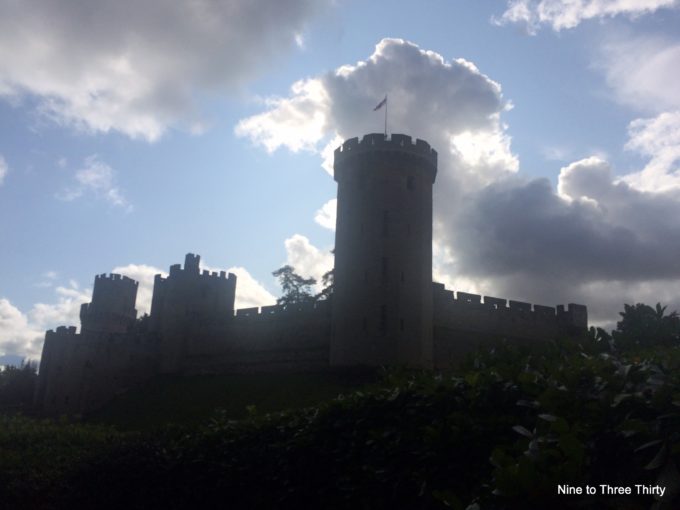 The Haunted Castle Halloween event at Warwick Castle is running from now until 3rd November, which makes it a perfect half term dayout.  Many of the events are aimed at younger visitors, but there’s plenty for adults too, so it’s a good trip for all ages.  With eerie experiences around every corner, Warwick Castle at Halloween is an unmissable experience as the Castle bristles with the energy of those who’ve lived – and died – at the Castle over the centuries. 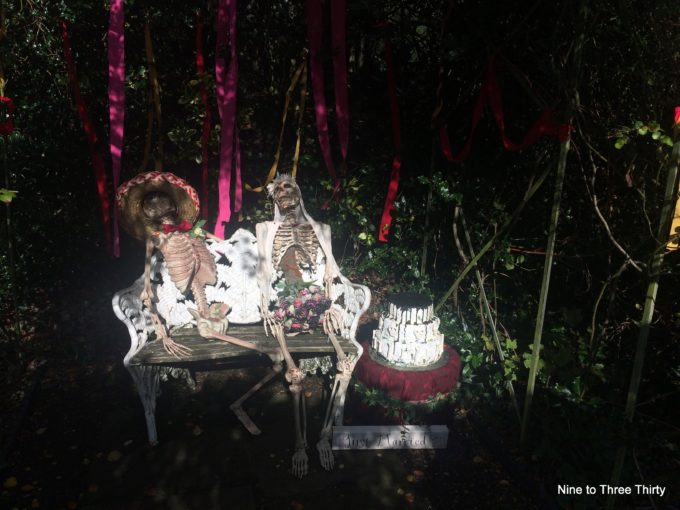 Three new spook-tacular attractions are being launched for Halloween 2019. Whilst youngsters will enjoy convincing the snooty butler in the Spooky Mansion that he’s not alone, fans of Most Haunted can experience the spine-tingling thrill of joining the Haunted Warwick – Live! team as they film a live ghost hunt in the depths of the Castle. Meanwhile, the bravest can head out to The Haunted Castle after dark to pit your survival skills against the terrifying army of the dead. Travel through the Castle to make your escape and (hopefully!) live until sunrise in the Dead of Knight scare maze. 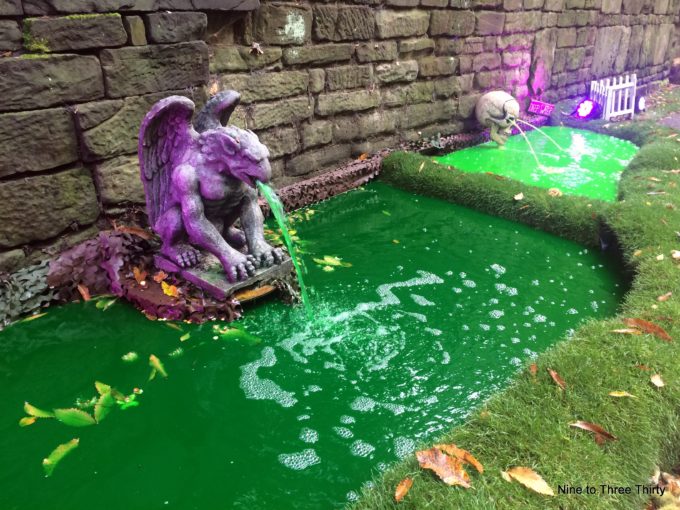 We did the Haunted Hallows trail which starts next to the Horrible Histories Maze.  It takes you through a series of spooky settings with lots of skeletons, ghosts and mummies.  There are sound effects to add to the atmosphere and along the way there are actors to bring it all to life.  A favourite for us was the chance to take some spooky selfies.

There are lots of special shows to see many of which take place on the Dead Centre Stage in the castle courtyard itself.  We saw The Wizard’s Apprentice which was great fun and suitable for all the family.


Of course, you can still see all the usual Warwick Castle attractions too.  A real highlight for us was the The Falconer’s Quest which is new to Warwick Castle this year.  We’ve always enjoyed the birds of prey displays, but this is something really quite special and unlike any other display I’ve seen.  The birds fly so close to the audience, it’s breathtaking.  It’s amazing to see the birds catch pieces of meat in the air and the finale is really worth seeing as there are so many birds of prey in the air together.  A real must-see.

Disclosure: I was given tickets to enable me to review the event, but my opinions are my own.

In London you are spoilt for choice for museums and art galleries, so I’ve picked out some of my favourite must sees. It’s good to seek out a well placed hotel like The Montcalm London Marble Arch so that you are well located for all your museum visits.

A trip to London would not be complete without a visit to the National Gallery.  It’s an outstanding museum with a huge selection of wonderful art that features just about all the great names of art and you can trace the development of European art picture by picture.  There are so many highlights to pick out, it’s almost impossible.  For me though the stand out pictures include the many Titians, especially the vibrantly coloured Bacchus and Ariadne and the more subdued, but moving Diana and Actaeon.  For earlier art enthusiasts there’s the jewel like  Wilton Diptych which is a masterpiece of its age.  Later favourites include Stubbs’ sublime Whistlejacket, which forcefully brings the great horse to life and an iconic Sunflowers painting by Van Gogh.  As the gallery is free to visit, you can easily pop in for half an hour to see your favourites or look for inspiration.

Whilst you are in the area, it’s worth popping around the corner to the National Portrait Gallery. The Gallery holds the most extensive collection of portraits in the world.  It’s spans the ages with images of medieval royalty, through the Tudor dynasty, right up until the present day. Again this museum is free to visit so you can just go for a quick visit if you have a small amount time available.

A fabulous smaller art collection to visit is the Wallace Collection.  Despite its smaller size it still packs a punch in terms of the range of its exhibits and the quality.  The Wallace Collection displays the works of art collected in the eighteenth and nineteenth centuries by the first four Marquesses of Hertford and Sir Richard Wallace, the son of the 4th Marquess. It was bequeathed to the British nation by Sir Richard’s widow, Lady Wallace, in 1897.  As all the pieces come from one private collection there is a coherence about it and a more domestic scale than a larger gallery.  The highlight for me is Franz Hals’ sumptuous Laughing Cavalier, but there’s also a charming portrait by Rembrandt of his son and a number of Murillos.

Another must see on the museums list is the British Museum.  There is so much to see here and you could easily spend the whole day here as the collection is vast.  I find the Rosetta Stone fascinating and the marbles from the Parthenon in Athenes are unmissable.  There’s also an Easter Island statue and more from ancient civilisations like the Assryian Lion Hunt reliefs and Tang Dynasty figures. It’s not all from far flung parts of the world and one of my personal highlights are the Isle of Lewis chessmen, which is probably the most famous chess set in the world.  I also love the Portland Vase which proved to be be Wedgewood’s inspiration.

The combination of history and ships is a compelling one.  We have explored a number of museums and attractions as a family which offer both of these themes, and they have all been big hits.  One of the best places though to get a hands on look at maritime history is Chatham Historic Dockyard.  The Historic Dockyard in Chatham made and repaired war ships during the 17th and 18th centuries. The most famous ship ever built here is HMS Victory, best known for playing her part in the Battle of Trafalgar under the leadership of Lord Nelson and still a commissioned Royal Naval ship today.

Chatham Dockyard is located on the River Medway in Kent. For over 400 years Chatham Royal Dockyard provided many ships for the Royal Navy, and was at the forefront of shipbuilding, industrial and architectural technology. At its height, it employed thousands of skilled artisans and covered 400 acres. Chatham dockyard closed in 1984, and 84 acres of the Georgian dockyard is now managed as a visitor attraction by the Chatham Historic Dockyard Trust. It’s a great day out and the sort of place you’ll want to revisit again as it is difficult to fit it all into one day.

I have a family annual pass to give away to readers (this covers 2 adults, 2 children or 1 adult, 3 children) and is worth around £60.  Enter via the Gleam widget below.

1. No bulk, third-party or automated entries.

2. Entrants must be aged 18 years or older and resident in the UK.

3. The winners will be chosen by a random draw.

4. Promoter is responsible for fulfilling the prize and full contact details of the winner will be passed onto the promoter.

5. The winner’s name may be published on this site.