I had a great weekend.  As I said last week I won a rather nice competition with Telford Shopping Centre for a style consultation and makeover.  So last Saturday I set off for Telford by train – I didn’t fancy driving there and navigating around as I don’t know the town.  I was standing at our local station when we had an announcement to say the next train wasn’t stopping at our platform.  This happens quite a lot and it’s usually a Virgin Pendolino or something coming through, but this time it was clear from the sound that whatever train was powering down the tracks towards us was not a Virgin train.  Because of the layout of the station we couldn’t see what was coming, but all of a sudden it was there: an enormous steam train in full flight.  I don’t think I’d ever seen one moving that fast and certainly not up close before.  It was so much bigger than a modern train and just dominated the platform with its noise and its steam.  It turns out it was the Clun Castle, which has just been restored at nearby Tyseley and it’s about to start taking people from Birmingham on trips on the mainline.  It was a bit of a letdown to get the Transport for Wales train that turned up to take me to Telford shortly afterwards.

Getting to Telford was easy enough (just 2 stops on the train and a half hour ride) and the shopping centre was an easy walk from the station.  I got there early and started plotting how to spend the £100 voucher I’d won.  I had a consultation with a stylist and that was really useful.  I have a big birthday coming up this year and I am thinking of having a party, so I wanted something nice to wear and she gave me some good advice.  She had a number of outfits that she’d borrowed from stores around the centre and one seemed very suitable, so I decided to check that out later.  Next I had my makeup done which was very nice.  After that I went down to Monsoon, which is where the dress I’d seen was from, and tried it on.  It seemed to fit nicely.  Monsoon also had a stylist working there and she helped me pick out some accessories.  I went to the till and found that it all came to £99, so a nice treat within my voucher. 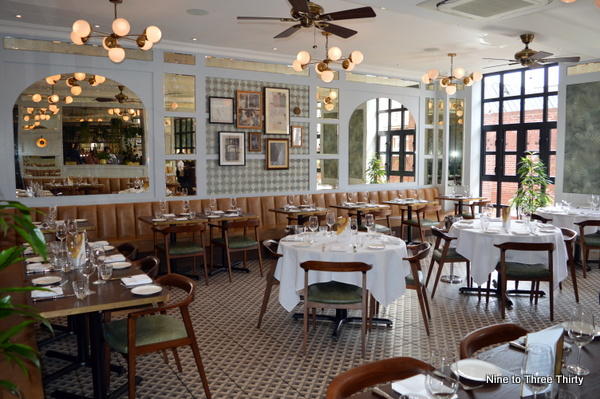 On Sunday I went to do a restaurant review at Lasan, a lovely Indian restaurant.  They had launched a sort of Indian take on a Sunday roast dinner and we went to try that out.  It was really tasty.

It was mostly a busy week after that.  H was back at school and we were struggling to get back into the routine a little.  As ever I’d overloaded the to-do-list for the first week back after the holidays and got myself a little stressed trying to fit it all in.  I did manage a walk to see the bluebells in the nearby Clent Hills though which was lovely.