Last weekend I went out with some friends for a meal.  This is my dessert: a tiramisu.  We had a lovely time.  One thing that stuck out though was that this was the same crowd as I had round to my garden just before our local lockdown.  Then we were considerably further apart and in the open air, but apparently that isn’t allowed any more, but sitting multiple households together at a fairly small table is.  I just wish the rules were more logical – I follow them, but it’s easier when you can see the sense in them.  That aside the food was very nice and we had a lovely time.

This week I’ve got back to normal a bit with a return to the pool.  I swam for the first time in about six months.  I went straight back in at doing my normal 50 lengths and then even did a few more as I had an hour’s swim booked and I’d got a lane to myself towards the end.  So having done nearly 60 laps, I felt exhausted afterwards (although I bounced back after a bit of a rest), but the next day I felt a bit sore – I guess my shoulders are out of practice.

I have been doing more walking lately too.  This picture was taken on one of my longer walks lately. I found I walked more before lockdown when it was built into my week with walking to the swimming pool and the shops.  During lockdown I walked more too, as it was a way of getting out of the house and I’d walk H up to his Dad’s which took an hour there and back.  Then there was less walking, as I was driving to the shops because I was going less often and I had to get Dad’s shopping too when I went.  Swimming was closed so I was missing that walk. I’d started walking in the countryside again with a friend, but I find I walk more when I fit it into my day to day life. 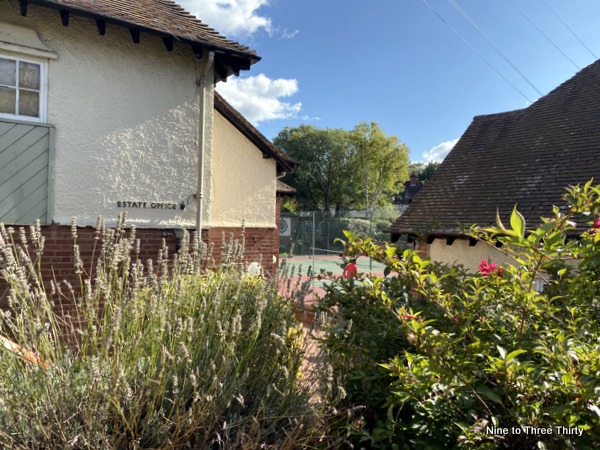 This week I’ve tried to build in a bit more of that day to day walking.  Being back at swimming will help as that’s 15-20 minutes walk each way.  I walked to the library in the next town because they are open for browsing and my usual library isn’t.  On the way back I walked through a model village estate which has its own tennis courts.  Lovely to see people out enjoying the autumn sunshine and fitting in a game of tennis.

In other news H has now been sent home from school to self isolate.  The school got in touch on Thursday to say someone in his year group bubble had the virus and they all had to go home until it’s two weeks since that child was last in school.  So H has a week and a half of home schooling to come.  The school are wanting them to log into live lessons more than last time, which means he can’t finish all his work by lunchtime like he was before, but he much prefers it to doing the commute.  I suspect he will be in and out of school for a while. To be honest it’s actually easier in many ways with him at home: we aren’t up at the crack of dawn and life isn’t as rushed.  The downside is that he tends to eat me out of house and home.