It’s been a football sort of week, but my pictures don’t reflect that.  I did take H with me to watch the football on Saturday, but he didn’t want to know about the game.  Then it seemed his devices ran out of power (despite supposedly been charged up) and he ended up using up all the battery on my phone.  It was a bit frustrating, but I did get to enjoy the match with friends.

On Sunday we went to review a Sunday lunch at a local hotel.  I took Mum and Dad, as well as H, and it was nice to see Mum being able to manage a chocolate mousse pudding as she can barely manage any food these days and only actually eats yoghurts and custard.  The top picture is of the hotel – it was very plush. 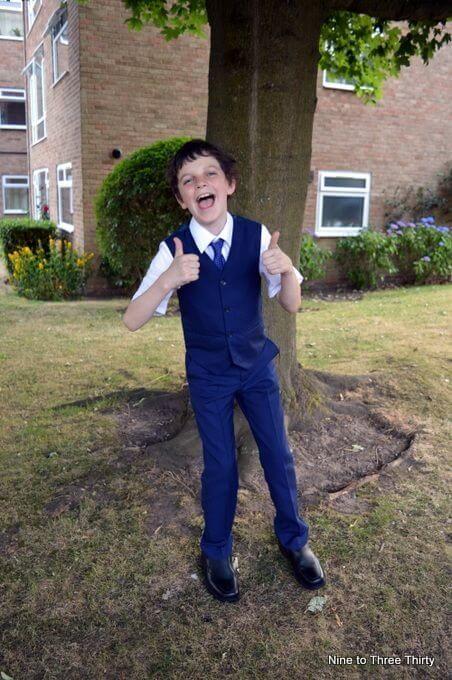 H has had a busy week this week with lots going on.  On Tuesday he got confirmed and there was his last primary school sports day too.  Here’s a picture of him after his confirmation.  He looks very smart in his suit, but not at all saintly. They had a little party at the school afterwards and I think all the kids managed a second dinner , even though I’m sure most had had their tea already.

I took H to see some friends perform in a concert in Symphony Hall this week – it was a community choir concert and it was very enjoyable.  Here’s H amusing himself before the start.  Afterwards he got to a sneak into a nearby pub for a slightly late drink and I think that appealed.

This week I got some double glazed window units replaced as the seals had broken.  I originally got the quote 2 years ago and for various reasons I didn’t get the work done until now.  It’s made such a difference to the light in H’s room and the kitchen.  It forced me to tidy H’s room up, so the man could get in to do the work (it just wouldn’t have got done in time if I’d left it to H).  H’s job is to sort through all the stuff that I couldn’t put away because I didn’t know what it was or where it lived. The plan is to decorate his room soon and get rid of this horrible carpet which has seen better days and is a pink colour.  Strangely H sees nothing wrong with it, but I’d like to get it sorted before he brings home any new friends from secondary school.