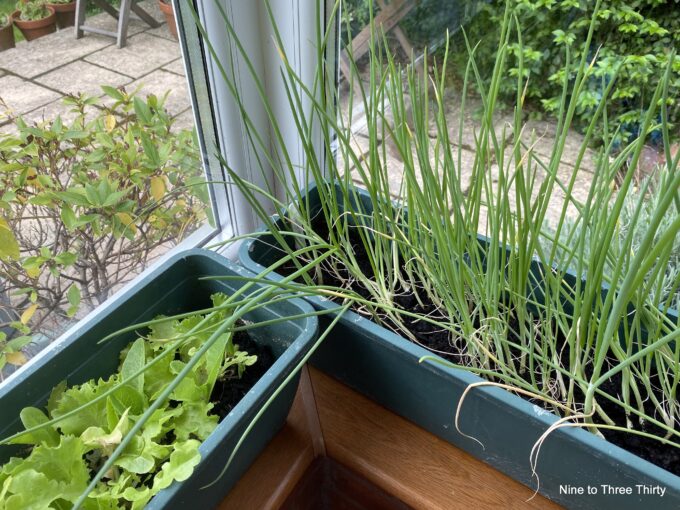 I’ve grown lettuce in the conservatory for several years now.  It’s very handy to get a few leaves when I need them and it seems the best place to grow it as it does better there earlier in the season than the greenhouse.  This year I decided to try the spring onions inside too.  I’ve tried them outside without success and last year I tried the greenhouse, but didn’t do that well.  This year I have done so much better with them and they are nearly ready to harvest.  I have even planted up another container of both spring onions and lettuce, so that we can be completely self sufficient in these for a few months.

The veg patch is doing well too.  The sweetcorn really jumped ahead with the lovely weather last week, but this week they have been less keen.  Hoping for a good crop this year as never had so many plants in.  We’ve had home grown peas this week too and I don’t think the beans will be too far behind.  The potatoes are flowering too, so I think they will be ready before too long.   I look to be on course for my best ever year.  It’s a pity though that my squashes haven’t germinated – I may have to buy some plug plants.

I’ve not been out in the garden as much this week as the weather has been less good, but I’ve had more blog work coming in, so I’ve been cracking on with that.  I’ve also cleared a few long outstanding items off the to do list.

The reading continues.  I find I tend to read more when the weather is fine, as I tend to try to get my jobs done early in the day or in the evening, so I can enjoy sitting in the garden with a book in the afternoon. This week sitting out hasn’t really been a option, so I’ve mostly read in bed or taken a break in the afternoon for a cuppa and a book. The other thing that makes me read more is when I’m reading a good book.  I struggled with Noughts & Crosses: it was an interesting theme, but a bit clunky in the writing.  I struggled with it for about three-quarters of the way through and then it got better and I whizzed through the last bit.  I don’t think I’ll bother with the rest of the series though.  The Kin is by Peter Dickinson, whose book AK I’d recently read.  I really enjoyed AK, but The Kin was even better – I’m surprised I’d not heard of the author before because he’s won a couple of Carnegie Medals (very prestigious children’s book prize).  I might be reading more in the future because he won those medals for books I haven’t read yet.

I loved Goodnight Mister Tom.  If you haven’t read it, it’s well worth a go.  It’s a children’s book about a boy who is a wartime evacuee.  It’s a very positive story, although there are sad bits in it.  H said he might read it and I’m going to try to encourage that. H was surprised I’d not heard of Holes by Louis Sachar before, as he says it’s been made into a film and it’s a very famous book.  I’m really enjoying it and I expect I’ll finish later today. Twin Truths is the book I’m currently reading as my crime/thriller selection.  It’s one I won in a competition I think.  On the blurb it’s described as a thriller, but it’s not fast paced and a bit of a slow burner.  I can see why they have described it like that, but I wouldn’t do so.  I’ve quite enjoyed it though, although it hasn’t gripped me, and I think I’ll finish that one today too.

The two books on the right are the next ones up.  One is another children’s book from the stash we borrowed from a neighbour.  The other is one of my competition wins from a few years back. I’d been saving book wins to read on holiday, but I often take my kindle these days.  I’m getting through my stack though in lockdown and I’m glad I had them to hand.