Two weeks in one for me this week as I was away last weekend.  The trouble with doing that is that I can barely remember what I was doing two weeks ago. I did venture into Birmingham city centre with my camera and spent some time visiting the streets near where I used to work for many years.  Most of the pubs have changed names – I wish pub firms wouldn’t do that when there is a perfectly good traditional name for that building. This handsome building is Birmingham Magistrates Court.

I also went to a lunchtime blogging event one day with Brewdog.  In fact, I think I was the only blogger there as most of the others seemed to be shareholders.  It was good fun though and I learnt a lot about gin and vodka making. It was strange tasting gins and vodkas in much the same way you would wines – swirling around the glass, taking in the aroma, etc.

Last Friday I went to Tredegar in South Wales with my Dad and we met my brother down there.  Dad and I arrived at lunchtime and after we got settled at the B&B (where these lovely tulips were out in force), I went off to nearby Merthyr to meet up with a friend of mine.  My friend Michelle is someone that I first met online and I tend to meet up with her in the flesh once or twice a year.  We were sat in the sort of coffee shop that allows for lots of people watching, when another friend I first met online Lorraine walked past.  It brought back memories of a few years at Britmums sharing bottles of wine.  Sadly she was on her way to an appointment and couldn’t stop long, but it was great to see her.  It was also quite fitting as I had originally introduced Lorraine to Michelle. 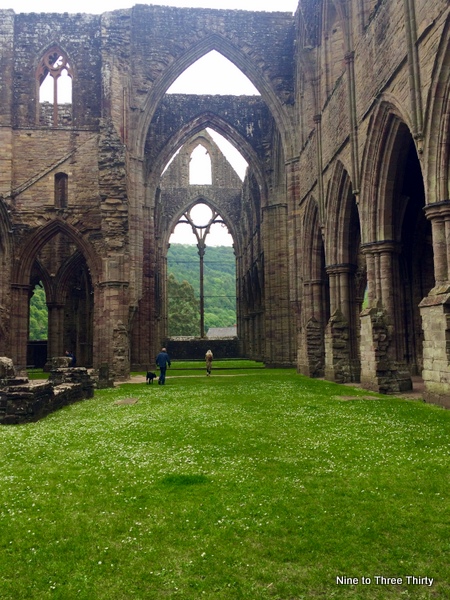 When I go to South Wales with my brother we mostly visit places that have connections to our family history, but we usually visit an historic place or museum as well.  This time we went to Tintern Abbey.  For some reason I had never been even though it’s not that far away and it would be possible to day trip from Birmingham.  It’s a spectacular abbey and it still has quite a bit of the walls intact, so you can get a good idea of how it would have worked back in its heyday.

We also visited a church in Chepstow which was the place where some ancestors were baptized.  I spotted this rather interesting tomb there belonging to Henry Somerset, 2nd Earl of Worcester and wife Elizabeth Browne.  Elizabeth served as one of Anne Boleyn’s ladies and was involved in Anne’s downfall.

I got back home on Sunday and found these lovely sandals had been delivered whilst I was gone.  I put them straight on and went out to a party in them.  It felt very summery to be sitting outside in a summer dress and sandals, but it did get a bit chilly after a while so I had to borrow a coat.