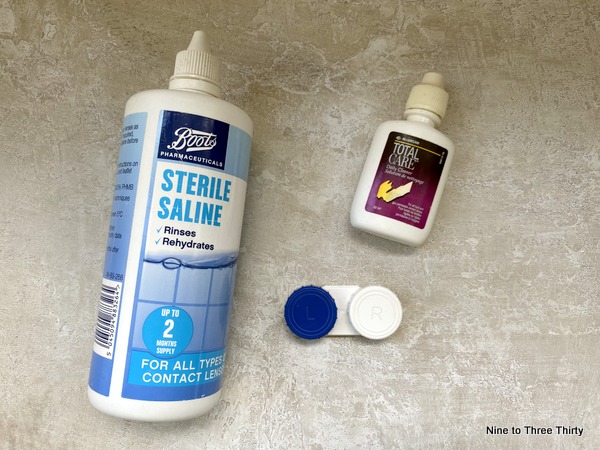 I started wearing glasses when I was 6 years old.  Maybe I needed them before that, but that’s when my parents became aware that I couldn’t see very well for things at a distance.  To start with I wore them at home and not to school, but once I reached the juniors at 7  I couldn’t see to read the board. That was when I started wearing them all the time.

Wearing glasses was never something I was that keen on. It didn’t help that there were basically three designs available to kids on the British National Health Scheme at that time.  One was a heavy black I think, and the other two hideous blue and pink monstrosities.  I wore the blue ones and hated them.  I’d often take them off because I was ashamed of them.

The optician said I could wear contact lenses at 14 and my Dad agreed to buy them for him.  I was so grateful.  At home I sometimes still wore the glasses especially at the beginning and end of the day.

Before my Dad bought me the lenses, I tried out a pair of gas permeable contact lenses.  My optician recommended these as best for your eyes (but this was before soft lenses became as popular as they are now). I’ll be honest and say that it felt like I was wearing 2 dustbin lids in my eyes, but I did get a bit more used to them towards the end of the hour or two that I had them on.

The optician ordered a pair to suit my eyes and I began to get to grips with them.  It was hard work.  I started off wearing them for a couple of hours a day and built up from there.  I guess it took a few weeks to get used to them.  The hardest thing was getting them in my eyes.  Partly this was because I was apparently supposed to put them directly onto my iris, but I found this next to impossible.  Eventually I gave up on that and just put them into the bottom of my eye and moved them from there using the skin below my eyes or my eye lids.

Getting the lenses out was usually straightforward.  You just pull the skin near the outer corner of your eye and blink.  Occasionally they would be a bit reluctant to come out, but that was pretty rare.  Usually it happened when my eyes were tired and dry, so some eye drops, saline or even contact lenses solution provided a bit of lubrication to solve the issue.

The most important thing to remember when using gas permeable lenses is good hygiene.  So I was careful about washing hands beforehand and keeping the lenses clean. There’s usually a cleaning regime recommended by the manufacturer or your optician.  In my case I had to use a cleaning solution, then rinse and store with another solution.  Every few weeks I needed to do a protein clean with protein cleansing tablets – this removed protein build up.  My experience was that when the protein built up, I found the lenses less comfortable to wear.  I noticed the difference when I’d used the tablets.  I always made sure I did the protein cleanse in the run up to an optician’s appointment as otherwise the optician commented on the build up.

Gas permeable lenses really are easy to lose though, so I’d be careful about where you put them in and ideally do it over somewhere soft and safe.  Putting them on whilst leaning over the bed is a good one if you have a hand mirror to use to position them.  The bathroom sink is less preferable because it’s hard and the lenses could get scratched if dropped.  The other problem is that they could fall down the plug hole. My brother once retrieved a lens I’d dropped by holding a sieve at the end of the waste pipe outside and flushing the lens through with water.  I wouldn’t  recommend that. Obviously if you do have a mishap like this and are able to find your lens, you need to clean very thoroughly before using again.

To begin with I had the lenses insured and that gave me peace of mind.  I did need some replaced due to losses in my teenage years. Later as I became more confident I decided to not bother and simply replace as needed. I felt the insurance was expensive and I was better off taking the risk myself.  This was easier to do when I was working and had more money.  I didn’t find I was losing them as often by then.

I usually took my lenses cases out with me as it was only small and it made it easier to deal with any lens problem.  Occasionally one lens would pop out of my eye when I blinked, but that was rare and I could feel it happening.  I never lost one this way as they were always trapped in my eyelashes.

The biggest problem was getting something in my eye.  This happened quite a lot.  Sometimes I’d be able to clear the bit of grit or whatever quickly, but often that wasn’t possible. I learnt to close my eyes if the wind was blowing and the air was full of grit, say near a building site. It could be very painful and it was quite regularly necessary to remove a lens.  This solved the problem immediately in most cases.  Sometimes it would be a smaller particle which was less painful, but still annoying and difficult to shift.  Being less painful meant that I could often delay taking the lens out until it was more inconvenient.

I always much preferred my lenses to my ugly glasses (and even to the less ugly ones I was able to buy when I was older). I’ve never been very comfortable with the way I look when wearing glasses.  However, they were limiting at times and wearing glasses isn’t always a very realistic alternative.  I have spent many years of my life swimming regularly and have always struggled with my vision in the pool.  Prescription goggles might have helped I guess, but they seemed expensive and I was worried about needing to replace them regularly.

Taking part in water sports is difficult with both glasses and contact lenses. I would like to have done more sailing and kayaking, but I always felt my eyes held me back.  My vision was quite poor, so going without was not a great option. Sadly though wearing contact lenses was risky and glasses weren’t a great alternative either.  Again there are possible workarounds, but I didn’t want to spend yet more money on my vision.  Gas permeable lenses had replacement costs about every two years and my glasses every three or four.  Add in contact lenses solutions and it was all getting a bit expensive.

Generally, I was happy with my lenses and they worked pretty well for me from my mid teens through my 20s, 30s and into my 40s.  Once I’d got used to putting them in, caring for them and my eyes had got used to wearing them, they were fine.  Yes I’d have rather not have had to bother with them, but for the most part they were a decent way of dealing with my short sighted vision.

Time for a change

In my early 50s, after over 30 years of wearing gas permeables, I decided I’d had enough.  They were becoming more uncomfortable to wear for longer periods of time.  I seemed to be have more minor eye infections.  My glasses weren’t working as well for me as a backup. This was because I was taking them off for close work and putting them back on for other things.  I could have gone for some varifocals I suppose. But, for me the solution was lens replacement surgery which has meant I can see for all distances perfectly.  I did wear multifocal gas permeable lenses for the last few years.  The multifocal lenses were helpful with dealing with different distances.