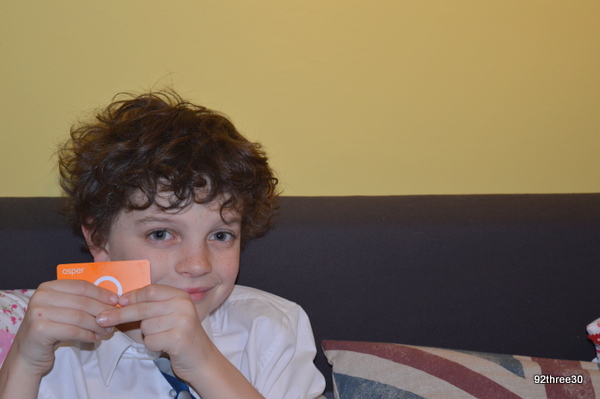 For the last couple of years we have been trying to teach H about how to manage money a bit.  Before blogging days I worked in financial services for 16 years and H’s dad is still doing so.  We are fairly good about managing our money as a family and don’t have debts other than a mortgage.  I want to pass on those sound skills to H as they will make a big difference to his life.  Of course though an 8 year old’s natural wish is to spend money on whatever they want at that moment.  To counteract this we usually enforce a cooling off period for H when he wants to spend his money on a big purchase.  We would let him buy something small straight away especially if it was at a bargain price, but generally we think it best to wait. H has got used to this way of working and will often formally ask for the countdown period to start on whatever he has his eye on.

Recently Osper got in touch and asked us to try out an Osper Card.  The Osper Card is a prepaid debit card.  You (the parent) register online and get the card sent through the post.  It just takes a few days to arrive and it is a proper debit card that you can use online or in the shops.  Osper very kindly loaded it up with some credit for H to spend and he was thrilled to have the chance to use his card just like a grown up.

Osper is very clever. You can set it up so that a regular allowance is paid onto the card on a regular basis as pocket-money or a clothes buying allowance say. It works from an app on your phone.  As a parent I can load it up with cash or set up a regular payment for H.  For children they can check their balance; keep an eye on what they are spending; or use the card to save up for something bigger.  Friends and family can use the card as a way of sending money for birthdays or Christmas. Joining Osper is free and after that there is a charge of £12 a year (taken from the parent’s account not the child’s).  As a parent I love it as it is so easy to use and I love the fact that we can see at a glance how much money H has, plus we don’t need to keep the cash in the house then.  H sadly still likes to actually see his money, so he hasn’t yet agreed to transfer his stash onto the card.

So after a few weeks of planning, H had finally decided what he was going to spend his Opser money on.  He planed to buy a present for both his parents and the rest to go on his choice of items.  Earlier this week H saw some Beyblade toys at someone else’s house.  Before that he hadn’t realised that they were available in this country.  So he ordered the presents for us that he’d planned in advance and then went on a Beyblade spending spree.  This morning he decided that he had spent too much on Beyblades and I ended up cancelling part of the Amazon order.  I was only able to cancel one of the two items he had decided against, so it’s a lesson learnt for him as well as us.  I think for the moment H isn’t quite ready to use the Osper online (all Osper cards are blocked online as a default, but you can opt to enable online spending as a parent) or only with our supervision.

As a parent of a child that is getting increasingly independent, I can see a lot to like about the Osper card.  It’s valid anywhere that Mastercard is valid (apart from a few sites that are blocked e.g. gaming or alcohol) and it’s got the guarantees that come with this big name.  As it’s a debit card, there is no question of getting into debt.   Also, it can be topped up very easily from my phone.  At the moment we don’t have much need for emergency money, but if (when he’s a bit older) he was stuck miles away without any money, it would be reassuring to know that I could transfer some funds to him instantly.  I think we will carry on using the Osper card as it has been a great learning experience for H: he has had to plan his spending; he’s learnt about how to order stuff online even putting in his card details himself; and he’s started to understand the concept of having a debit card.  As he gets older he’ll be able to use it more widely and learn more about managing his financial affairs.  The school curriculum is jam-packed full of things schools have to teach and learning about finances often doesn’t get the attention it deserves, so it’s useful to be able to encourage good financial habits at home.