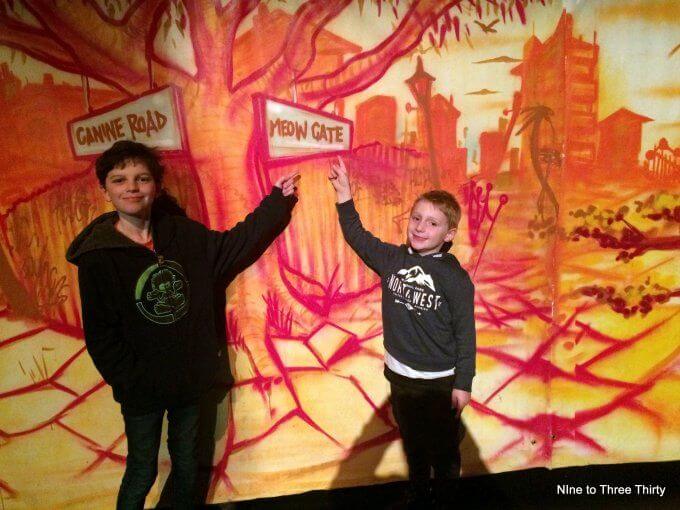 Today I took H and his cousin along to Birmingham Hippodrome to see Bouncing Cats and Boom Boom Pups. The show was in their Patrick Centre (accessed through the main theatre lobby) and as it was our first visit we were surprised to find their were no seats.  We sat on the floor initially, but most of the hour or so of the show we were on our feet joining in.  When we were asked to review it we weren’t sure what to expect, but the show promised beatbox, rap and graffiti in an immersive performance for children.

The performance is hosted and facilitated by 2 performers that seemed to be able to improvise and act their way through any situation.  To begin we they rapped about objects that we were holding up from out of our pockets.  My nephew was thrilled when they took the empty plastic wrapper he was holding and turned it into a rap.  The main performance though concerns a story about a group of cats and a group of dogs that meet up for first time.  This is all done with minimal equipment and props, but there was this fabulous scenery painted by one of the presenters.  The boys learnt a bit about rapping and beatbox as the story unfolded.

It’s all about joining in, but no one has to do anything – it’s all very relaxed.  The boys enjoyed dancing at the end during the ‘after party’.  It’s billed as suitable for 5-10 year olds and I think that’s about right.  H enjoyed it despite being at the top of the age range and he might still for a year or two.  My nephew is 6 and I did worry slightly that it would all be too new to him, but he did enjoy himself and really got into the story and the music.  There were younger kids there that seemed to be getting something out of it too.