In recent months H has been a bit dismissive about driving: he seemed to think it was something easy to do.  We have been on some long road trips and he didn’t appreciate why I needed to stop for a break.  Coming back from Scotland on our longest trip last year, I needed to stop once an hour even if it was only for a quick loo break, but H just wanted to press on and get the journey over as soon as possible.

We were asked to review Young Driver recently, but H already had one of their lessons booked in as he got one for Christmas (and it’s taken me a while to book it in).  So H has now had two lessons with them fairly close together, both at their Merry Hill venue.  One lesson for half an hour and the second lesson for an hour. Whilst the half hour lesson was fun and provided a useful introduction, I do think an hour gives a child a chance to really get to grips with the controls and start to build their skills.

Children over 10 (who are over 1.4m high, which H easily is at 11 and he’s far from the tallest in his Year 6 class) can learn to drive in a dual control Vauxhall Corsa.  They learn in a safe environment off the public roads.  At our venue, Merry Hill, this is a large empty car park which is laid out with lots of cones so that there is a mini road system in place.  So far H has been concentrating on the basics like moving off, steering, gear changes, etc.  Each time he attends his record book gets updated.  This means that new instructors know what the child has done before, when and to what standard.  To begin with the child gets help with the clutch (it’s a dual control car so this is easy to do), so they are able to get moving without the frustration of a lot of bunny hopping, but they do learn how to master the clutch as they progress. 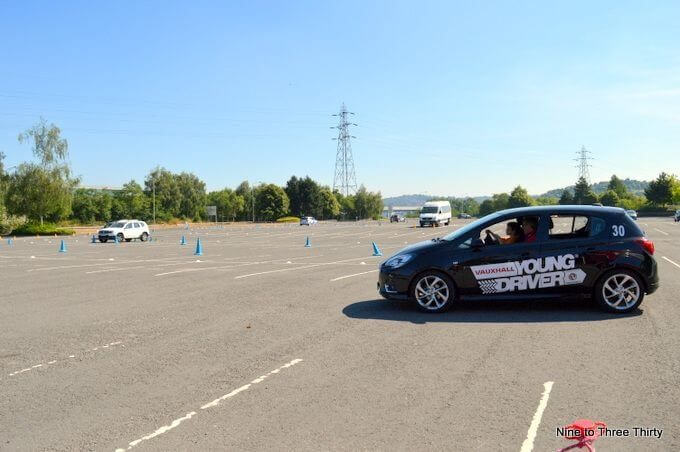 So far H has had 2 different instructors, but they have both been calm and professional.  They are professional driving instructors and have been DBS checked. As a parent you can stay and watch and even take a few photos like I did. It’s helpful that each car is numbered so that you can keep tabs on where your child is on the course (you might want to bring your binoculars if you have some though as it can be difficult to see the far end).

H has had a lot of fun with his lessons so far and I think we will continue with occasional lessons as a treat or as a present.  As the driver of the house I am pleased to say that H has a new-found respect for the skills involved in driving.