During this pandemic I’ve found myself in a different routine every few weeks.  Some of it revolves around what places are open; or whether H is in school or working from home or on holiday; and some it is just as the mood takes me. There was another change locally this week.  We were already in a local lockdown, but the new tier system has changed what we can do.  I was able to meet up in a small group in a pub or a restaurant, but couldn’t meet that same group in my garden.  Now it’s the other way around which does make it harder to meet up with friends and family.  But as a positive we are only Tier 2, so others have it worse.

One thing that has varied with my mood is the amount of being reading. I have spent a lot of time reading, but every now and then I get into something on TV and binge watch for a week or so. I’m worried that the library might close again soon (and it only recently reopened), so I’m planning to go this week and get some new books out.  The ones on the right are the ones I’ve read.  The ones on the left are to read, but they include a couple that were picked out for me by the library staff (think lucky dip).

Most weeks I go for a walk in the countryside with a friend.  It’s a chance to catch up and keep fit. This week it didn’t happen though as she had to work every day this week.  I’ve walked more locally instead. 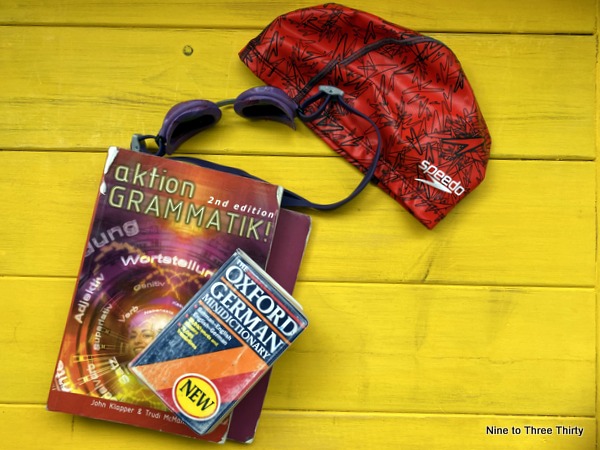 I’ve been back at swimming for a few weeks now.  Our local pool was slow to open, but I’m counting myself lucky as my niece is Scotland is desperate to go for a swim and hasn’t been able to since March (the local pool has been closed throughout).  I went twice this week.  It’s been more difficult to fit it in due to more limited, less convenient opening times largely.  I feel a bit sluggish in the water compared to normal and I feel like my speed is slower, but I’m swimming at least 50 lengths in a long pool when I go.

My German class stopped in March and there was talk of reopening in September, but it became clear that it wouldn’t be possible.  Now as an alternative we are having an online meet up once a fortnight.  It’s not perfect as not everyone has the internet in our group.  I feel quite out of practice despite having done some German on Duolingo very regularly.  I think I need to do a bit more or I will lose that skill.

Work is still slow.  I am getting about half of the work that I was before the pandemic.  It’s better now than it was March to June though, so that’s something to be thankful for.  I’m still spending less money too, so it’s working out ok for me. I’ve started doing some of the jobs I’d planned to do earlier in the year, but ended up spending time outside instead.  This week I’ve been going through broken links, etc.  I have been running reports on an SEO package that I bought a lifetime access to ages ago, but I’ve barely used.  One thing it’s forced me to do is to start getting to grips with some of the technical side of things.  I’ve had this blog for nearly 10 years and it needs a bit of an SEO spring clean.  It’s keeping me busy and I hope it will pay off by increasing my search engine rankings.