Last week I shared my pictures of the fox on the hedge in the sunshine.  I haven’t seen him or her on the hedge again since, but there has been some fox activity.  I took this snap of a fox in the garden during the day this week.  Then one night I woke up about 3 in the morning and saw foxes playing on my drive.  It isn’t really that surprising to see them as I think they make their home in next door’s back garden.  What tends to happen is that I don’t see a fox for ages  and then I will see one around quite a few times in a short space of time, then back to not seeing them again.

It’s lovely to still have some flowering plants in the garden at this time of year.  Most of the flowers are summer ones that are holding on, but these cyclamen are new for the season.  They inspired me to plant some allium bulbs in my flower border for late spring/early summer.  Alliums are a favourite, and if I’m to have them next year, I need to plant them now.  I’m hoping these to rather better than the last lot.  I planted some previously which gave an ok sort of display one year and didn’t really perform much at all after that.  Fingers crossed! 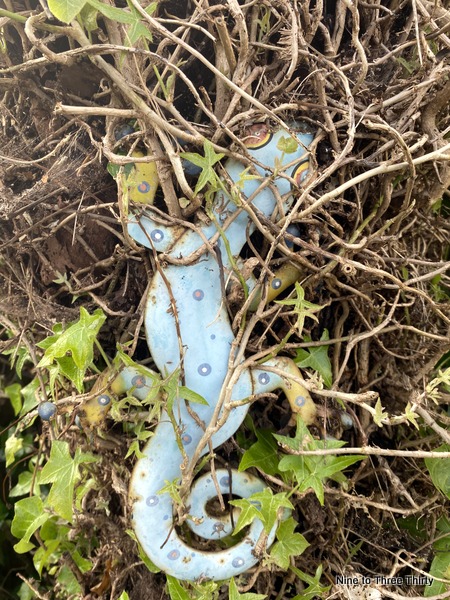 This little fellow was in our garden before we bought the house and he’s got rather faded over the years.  He’s on an old tree trunk that forms part of our hedge.  In the summer he disappears under the foliage, but reappears when the hedge is cut back.  Some years ago I won a Caribbean cruise and on one of the islands we spotted lots of market stalls selling very similar lizards (but much more brightly coloured than he is now) – I wish now that I’d bought a friend for him whilst we were there.

H went back to school this week.  He’d been off for two weeks because some of his year tested postive for the virus.  Initially he was supposed to go back on Tuesday, but then someone else tested positive who had been in school at a later date, so he went back on Friday instead.  He’s only got a week now to go before a two week half term. This time rather than just setting work, H had mostly live lessons delivered online.  It meant that he was kept working for longer than when he was off earlier in the year, but he still gets the benefit of not having to travel to school.  Some lessons aren’t done online like PE (difficult to run a games lesson online I’d think) and latin (not sure why for that).  H only started the latin a few weeks ago, but he’s already picking it up and he is much happier doing it than he was studying French. Plus latin has the advantage of including some classical studies and H has always been interested in that sort of thing.