The first picture shows the reality of life with a teenage boy working from home whilst his school year is in quarantine.  They were told to wear uniform (apparently – later that turned out not to be the case) and not to work in their bedrooms.  The first couple of days saw H dressed in uniform on the top half and the bottom half joggers. Since then he’s been getting dressed every day in casual clothes, whereas in lockdown he spent a lot of time in pyjamas. I prefer him to get dressed and it’s warmer too.  I don’t want to have the heating all day even with both of us home.  H is lucky that we have a spare room, so he’s been able to work somewhere on his own, without it being his bedroom.  Sadly this just means that another room gets the messy treatment – I couldn’t work like that.

Schooling from home is a bit more serious than it was in lockdown too when most of the lessons were just work set to do in your own time.  Most of his lessons now are on Google Teams and are live.  A few aren’t and not all the Google Teams lessons are the full length.  He has fewer distractions at home than in the classroom, so he’s able to work quite quickly and usually does less than his scheduled hours for the day. The big bonus is not having to get to school and back, which frees up a lot of time.  I’m loving being back to later, less rushed mornings, but H does seem to get through more food when he’s at home all day.  I think this is us for the foreseeable future as at least two years have been off from his school pretty much all the time since they went back in early September. He’s back to school later next week so we will have to get back to the morning routine then at least for a while. 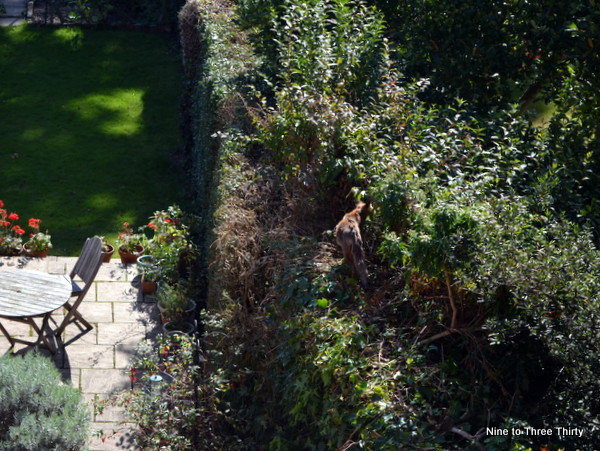 In August I got the hedge, which runs down the side of the garden, cut back, but this year took more off than usual as it needed a good haircut.  I’ve also been trimming the ivy off the fence closer to the house which had become very woody.  Doing all this seems to have opened up a new part of the garden up to the local fox.  I was surprised to look out of the window to see him (or her) walking along the top of the hedge and then picking out a sunny spot on top for a long nap. I’d been thinking about sitting outside for the afternoon (it was a bit borderline), but I decided to leave the fox in peace and sit in the sunny conservatory instead.  It was a bit bizarre though, as the fox was really close to me when I was sat there as my seat was right across from where he was dozing and I could see him quite clearly.