As you know last week was dominated by our kitchen work.  Last Saturday we still had the plasterer in during the morning.  No sooner had he left when the tiler arrived to quote and measure up.  It felt like it wasn’t our home anymore, there always seemed to be someone there.  So on Sunday it was a relief to have the house to ourselves for a bit, even if it did mean that we made no progress that day. In some ways Monday was the worst day.  The workmen were back and our kitchen units were delivered, but as we were having the kitchen floor releveled that day, the cupboards had to go somewhere.  Most went in the conservatory, but some overflowed into the dining room (our makeshift kitchen).  We couldn’t do in the kitchen for several hours after the work(and nor could the cats so they were out of sorts). 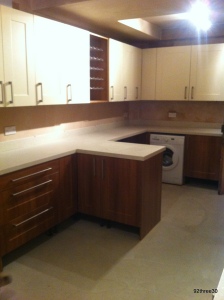 From Tuesday it got better though.  Cupboards started to go back in.  We were able to reclaim our temporary kitchen as the units moved out.  In fact, by Thursday the units and worktops were in.  By the time the fitters left on Thursday most of our new kitchen was in place.  There’s still quite a bit to do.  We are having some decoration done next week (the ceiling and a base coat on the walls) and the floor tiles will be going down.  Even at the end of the week we won’t have a cooker, but at least we have a kitchen sink now and that is what we have missed most.

On Friday H had a teacher training day.  He’s off on Monday too, so a long weekend off school for him.  It was nice that the fitters had finished so that we had the house to ourselves and could take our time getting ready in the morning.  Then off we headed to the Wyre Forest to be amongst the first to go on The Gruffalo’s Child Trail.  It was a lot of fun and a nice day to blow away a few cobwebs.