Last weekend was the Heritage Open Days weekend and we like to visit somewhere that usually charges, but is free for the day, or better still somewhere that isn’t normally open to the public.  So we headed off to Kidderminster for the day to visit Caldwell Castle.  There’s just a 14th century octagonal tower left of the castle, but it’s been lovingly restored into a rather quirky home.  After that we treated ourselves to a pub lunch before visiting one of H’s favourite places: the museum at the Severn Valley Railway station in the town.  H’s absolutely favourite thing is using the old fashioned phones that they have set up with a telephone exchange.  You can dial other numbers within the group and there’s a lot of fun to be had.  It’s educational too as whilst these phones were part of my childhood, they work quite differently to modern phones and H had to learn to use them properly.

Sunday saw me catching H’s back to school cold.  It was a stinker and I struggled through a family bbq.  Then on Monday Mr Nine to Three Thirty came down with it too.  Not sure how H managed at school with it and he has barely complained.

During the week I’ve been trying to catch up with some house things.  There was a trip to Ikea to get some storage boxes among other things.  We also managed to get a chimney pot cover put on – this has been something that we have been trying to get done for nearly a year.  A lot of builders didn’t want to know about it as it was a tricky job, but a small one.  Rather more fun was getting out new memory foam mattress onto our bed with some new bed linen. 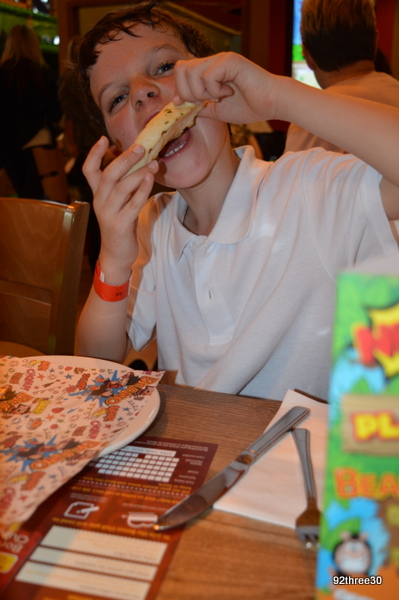 Friday was the day H had been looking forward to.  After school we went to soft play at Brewers Fayre with his friend and we ate there too.  A lovely treat for the end of the week.