I didn’t post last week because I was so busy last weekend with my family.  My sister was down from Scotland with her husband and children, so there was a lot of getting together and doing family things. In the run up to that weekend I was busy working on H’s room.  It’s now mostly finished and it’s just a case of bringing everything back into the room, but that is a task and a half as I’m hoping to clear things out too.

I had a new garden gate earlier in the summer and I’ve now finished the look off with a bit of trellis.  It matches next door’s gate now as that has trellis above too and hopefully it adds a visual deterrent if nothing else.

My garden has hedges down both sides most of the way at least and I like a hedge as it’s good for wildlife and it’s cheaper to maintain than a fence, but it is more work. I read somewhere that it isn’t good to cut the hedge too early in the year because of nesting birds, so since August started I have been busy cutting sections of hedge and filling up the green bin with the clippings. Thankfully I am now very nearly done.

It’s been so nice to have some good weather this last week because the previous week was horrible.  I’ve been able to take Mum for a couple of walks in the park in her wheelchair.  The cats have been in the conservatory making the most of the chance to bask in some early autumn sunshine.

The anemones in the garden are still looking nice although they are starting to fade.  I seem to have as much colour now in the garden as I did earlier in the summer. 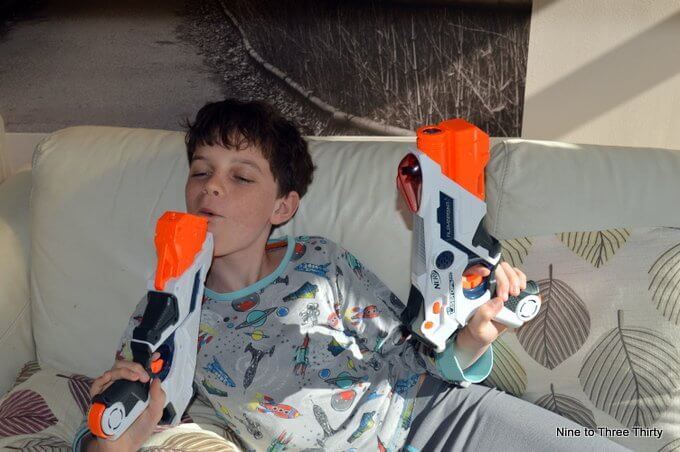 Lots of Christmas gift guide things have been arriving in the house.  There was one particular box that H was very keen to open and try the contents.  Nerf guns are always popular here, but these ones don’t have darts and work like laser guns.