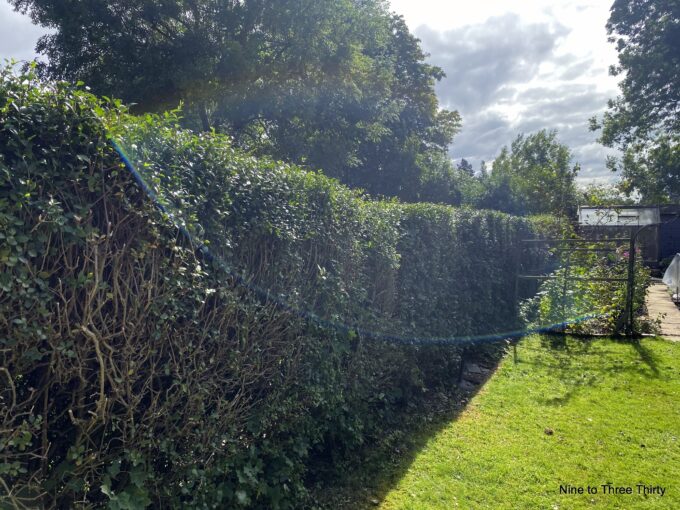 One big theme for the week has been hedge-mageddon.  The hedge has encroached a little too much into the garden in recent years, so this year it’s had a very severe hair cut to free up some more space and light.  The problem, as always with hedge cutting, is dealing with the clippings afterwards and this year it’s been worse than ever.  I guess I could take them to the tip, but that would make a mess of the car and I suspect it would take multiple trips, so I’ve tended to avoid doing that.  Luckily though our council provides large garden waste bins.  Most of the year the bin is a good size for my needs, even with a largish garden.  If it gets full, it’s usually close to bin day.

This time though I filled my bin up and then stood in it and repeated.  I filled up 5 trugs with more stuff and pushed that all down too.  Still loads.  I borrowed a neighbour’s bin and filled that to the top too. Thankfully the bin men collected this week, but I think both my bin and the neighbour’s will be full again before I’m done.  At least I can see the grass again now.

I decided to organise a meal out for Eat Out To Help Out with some friends.  This time I was looking for a country pub that I hadn’t tried before as I can’t remember the last time I went somewhere new.  The pub was lovely and had made a lot of effort with social distancing and hygiene.  I’d happily go back there again.  My starter was very tasty, although my main was a bit disappointing (it’s a salmon risotto) and they served some very decent real ale. Afterwards we went for a walk round the village and then tried another pub that wasn’t offering the deal, but was advertising free pool games that evening.  We played the pool in a room that had been a private dining room and we had it to ourselves. Amazingly, despite my appalling pool technique, I won two games and came away undefeated. A very pleasant evening.  It’s a pity the deal is ending soon as we have had some nice nights out from it, but it has been a bit difficult to book.

This week we had my sister and her children over.  We haven’t done this since before lockdown, so it was ages since we had seen them all.  They don’t live that far away, but it is a reasonably lengthy bus ride and there are too many of them to pick up in my car.  It was lovely to see all the nephews and nieces again and catch up with my sister. Inevitably afterwards there’s always something left behind and this time I found this slightly scary creature abandoned on H’s bed.  Hopefully we’ll be able to see them again before too long.