Another double week for me. I don’t seem to have been at home that many weekends this summer.  Last time I’d just returned from Scotland where we were visiting my sister and her family.  We had a few days at home and then H went off to Madrid for a holiday with his dad.  The only contact I got from him whilst he was away was a picture of a plane at the airport on the way home.  He’s very much a teenager now, even if he is only 12.  I did manage a nice meal out reviewing Bill’s in Birmingham’s Bullring.

It’s been a while since I won a holiday prize, but a few weeks ago I heard that I’d won a trip to the Edinburgh Book Festival.  I’ve been to Edinburgh before, but never whilst the festival was on.  Basically the prize was two nights at a very swanky hotel, The Balmoral with the address 1 Princes Street, plus tickets to four Book Festival events, so it was just travel and spending money to find. The hotel is basically just above Waverley station, so it couldn’t be more central really.  I loved the bathroom with its Sean Connery pictures on the wall.

The Book Festival is very relaxed and there are so many events on each day.  It was difficult to pick out who to go and see, but I picked non-fiction writers as I thought their talks might be more interesting.  The first two talks were very interesting and both were broadly speaking history related – that doesn’t really do the second one justice, but it’s difficult to describe as it was about how things like geology and ocean currents affected mankind’s actions.  There was also a talk by the founders of Aardmann Animations, who are responsible for Morph and Wallace & Grommit, and I really enjoyed that.  I was flagging a bit by the last talk I’m afraid and it didn’t seem as interesting, but three out of four isn’t bad. 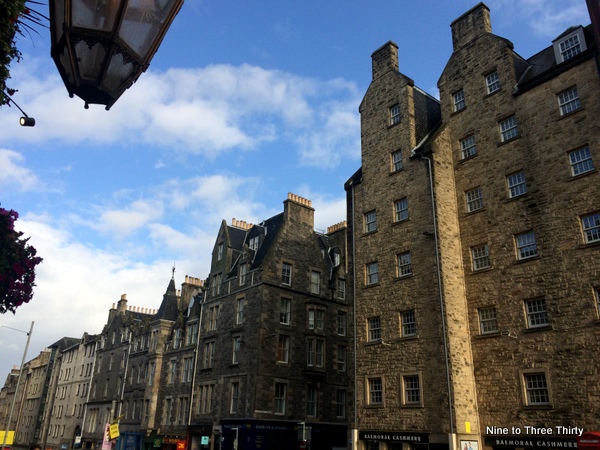 It wasn’t all Book Festival events though as there was plenty of time off for eating and drinking.  Sunday was mostly spent watching Fringe street performers and watching the world go by.  Trips to Scotland have a good record for seeing someone famous for me.  I once saw Hugh Laurie at Waverley Station and I saw Jeremy Irons on my way to Scotland at a service station on another trip.  This time I saw Eddie Izzard who was staying at the hotel too and eating breakfast when I came down to eat.

It was a lovely trip and I’d like to go back again during the festival another year.  It was a bit difficult to find seats in pubs, etc. and the streets were busy, but there was a real buzz.