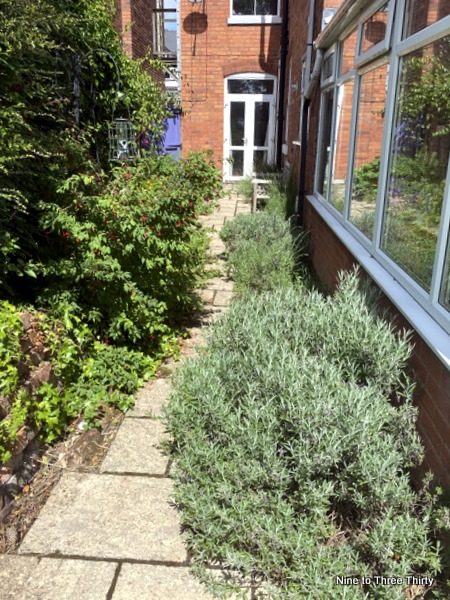 Last week I shared this picture of my lavender border, but it did rather hide the gaps and problems within the border.

Luckily one of my readers, Susan, suggested a way of bringing back lavender after it gets all woody.  If you don’t prune lavender each year it can get like this and I had a couple of bushes that look a bit of a mess close up as all the green growth is up high over a very woody base.  The secret is apparently to dig it up and bury it deeper in the soil, so all the woody bits are under the ground.  Some of the lavender I’ve tried rescuing like this, so we will see how it goes.

The other week I was chatting to my neighbours about the ivy that covers the fence between us.  It’s a bit of a thug of a plant, but it does provide some welcome greenery. We weren’t sure whose garden the plant originated in, but I think I may have found the answer.  As you can see it’s got a big stem and it grows really high.  I’ve been trimming it back to bring a bit more light into my border, but I’ll have to get the ladders out for the last bit I think.  I haven’t got rid of it entirely as that would just leave a bare fence and I don’t really want to be looking at that out of the kitchen window.

I went back to Aldi to buy some more compost this week (I used the last lot within one afternoon), but they didn’t have any as it was on special and sold out.  So it had to be a trip to the garden centre.  I decided to go out to the Clent Hills, to give the car a bit of a run, and I know there are three big garden centres there within a few miles of each other, so I would be sure of getting what I wanted.  I bought compost which enabled me to plant up these geraniums that I got from Aldi.  Some are from last year and they are already in flower.  The new ones have yet to get there.

Whilst I was at the garden centre I bought another lavender plant for the border, this quite smart, plastic, grey container and I went for a impulse buy of some pinks which I thought would look good set off the grey of the container.  There are also some white geraniums in there, which I already had, and I think the combination of white, pink and green in the grey pot will look quite effective.  I think I’m going to stop planting containers now for a while as I am running out of space, plus I am trying to keep to a budget (although I have managed to get some bargains).

I’m planning to have a few people round to socialise in the garden this week, so I want it to be looking good.  I’m celebrating my birthday today, so it will be nice to see a few more friends.