Last weekend saw us having an ‘only day’.  This time it was an ‘Only Mummy’ day as Daddy was in London for the rugby.  I won Mr 92three30 the tickets.  At the time that I won them, his team Leicester Tigers were in with a chance of making it to the final.  Sadly, they were knocked out in the closing stages of their semi-final with local rivals Northampton.  He was still up for going along and he and his brother (also known as Uncle Roger the Slodger Dodger) met up to go.  They were supporting Saracens, who also lost out in the closing stages in a rather controversial try. 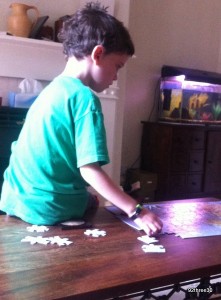 So we had a quiet day at home doing some jigsaws amongst other things.  H has been keen on jigsaws and board games this week and we’ve done a few after school, as well as on the weekend.  He likes to do 100 piece jigsaws these days, but he likes to have an assistant.  It’s not that he needs help, but it makes it a social experience and he doesn’t lose interest.

Mr 92three30 came home in a terrible state after the rugby.  This wasn’t because of the amount of beer he had drunk, but he’d come down with a nasty cold.  Most of his Sunday was spent in bed, which H found rather frustrating as he wanted to play with Daddy as he’d missed out the day before.

On Tuesday I went up to the Trafford Centre in Manchester, for the day, to attend a Dyson event.  It was lovely to meet up with some other bloggers, including the lovely Angela from This is Life who shares the same sponsor as me for BritMumsLive.  I was seriously impressed by Dyson’s commitment to quality and getting the best engineering solution to a problem.  Their new fans are very quiet, as well as been effective and energy-efficient.  I loved the fact that they had worked so hard on reducing the noise.  I quite enjoyed sitting on a train for a few hours with my book: it was quite relaxing.

This week has been a week of mostly rather wet school runs.  H loves to scoot though whatever the weather, so he always scoots to school.  We usually walk home as we tend to do that with friends and it would be a bit anti-social if H was on the scooter and the others weren’t.  Generally, we go to school on our own though, so we can please ourselves.

We had one day when the rain didn’t seem to stop.  And plenty more with a good sprinkling of showers.  H loves charging around the school playground on his scooter playing Scooter Dogs, which is a type of Tig.

Friday was a lovely day weather-wise though and thankfully it was the one the school had picked for their beach day.  The whole of the infants joined in the beach activities and H got to go to school in beach gear. H liked it because there wasn’t a lot of writing going on.

Couldn’t resist putting in this picture of H’s gap in his teeth.  The adult teeth are starting to emerge, so this isn’t a look he’ll be sporting for long.