This week has been mostly very nice weather, but there’s been a little bit of rain which has helped out with the watering a little.  My patio is looking very colourful now and I have to say it’s never looked so good. I don’t usually get around to buying and planting much in the way of bedding plants, but I’ve been buying a tray or one bigger plant every time I’ve been food shopping.  In fact, last week’s shop was the first time I hadn’t and that was mostly because I’d either already got the plants or they didn’t take my fancy. I might venture out to a garden centre soon as I need compost and I would like to get a bit more choice of plants.

There’s a golf course close to where we live.  I often walk around the outside of it, but obviously it is usually too dangerous to walk over it.  The only time it’s usually possible is when it snows or late on a summer’s evening after it has closed for the day.  It has been lovely to get out and walk it in the sunshine (almost enough to persuade me to take up golf). There are different views of familiar landmarks and lots to explore.  There was even a family using one of the bunkers as a sand pit!  I’d be worried about buried dog poo, but it did feel a bit beach like.

Sadly it reopened as a golf course the other day, so I got in a last walk or two before that happened.  It’s good for the park really that it’s reopened, as it provides much needed income as the park is run by a community trust. I do wish we got to walk it more often though.  I have walked quite a lot this week in some sandals that I thought were well worn in, but as I managed to get a blister, I’m not sure I’d got that right.  Still it isn’t too painful and I can easily avoid rubbing it by wearing other footwear. 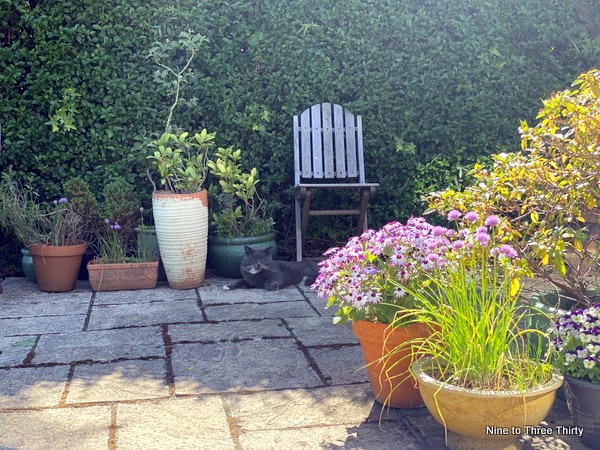 Can you spot the difference between the top picture and this one?  There’s a cat hiding in the shadows.  Most sunny afternoons I play a game with this cat.  My Dad calls him Putin because his coat has something of a Russian Blue cat about it – it’s grey, with a hint of blue.  None of the neighbours seem to know who this cat belongs to and I think he might travel some distance each day.  He looks well fed and has a glossy coat, but also the full face of a male cat that hasn’t been neutered.  He is also a bit aggressive (more than is usual – I’ve had cats for years) towards other cats.  I usually sit outside with the back door open, so I can hear the phone, the door bell, H, and my own cat can come out for a stroll.  The trouble is that Putin likes to come in and snaffle my cat’s food if he can.  He edges closer and slinks through the shadows, hoping I will forget about him or won’t notice him.  Then he slips in if he can.  I usually beat him at this game if I’m sat on the patio, but if I have wandered off to the veg patch or the greenhouse, he’s in.