After been away last week we had a few quiet days to regroup before heading towards more excitement later in the week. It soon became clear that we’d chosen the wrong week weatherwise to go to the seaside, but that’s the way it goes I guess.

We spent a lot of time in the garden this week trying to get it in order.  Everything is coming along fast now including the neighbour’s lovely magnolia tree.  A few weeks ago I had a surprise win of some raspberry plants turn up, so we have been trying to get the fruit bed ready for them.  They are planted now and hopefully we will have lots of raspberries in coming years.

Wednesday saw us at Drayton Manor for the day for the opening of the expansion to Thomasland.  It was a great day and it was nice to see how they’d developed the Thomas Land side of the park.  H is still happy at 8 to keep away from the big rollercoasters, in fact, he refuses to go on anything like that. 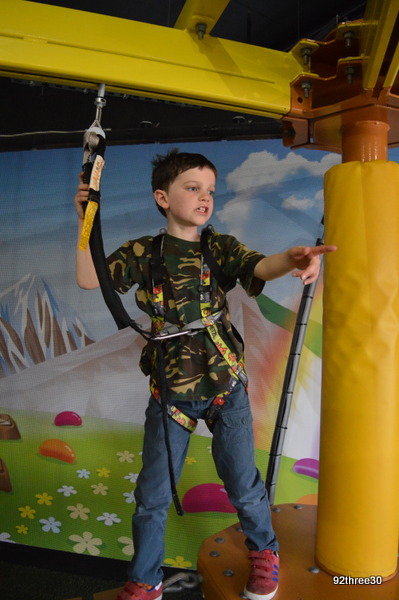 Thursday was another big day as we did H’s birthday treat.  This is the first year we haven’t done a party.  For the first three years of school we shared a party with 3 other children with a similar birthday.  This time we shared a treat with the boy from that group.  As they are close friends at school, it made sense to do it together and they were both keen to go to Quest at Merry Hill as they have both been there before for parties (and a review in H’s case).  They did some nerf gun shooting, both in the arena against each other and in the shooting gallery.  H also did the low ropes which is the same as the high ropes, but you are only about table height off the ground.

Friday night saw us at a party in our dressing gowns.  Last year we went to my brother’s father in law’s 60th party wearing a wig and a tash to look like him.  This year it was his wife’s turn so everyone turned up wearing dressing gowns, as the lady in question is well know for wearing hers a lot whether in or out of the house. Obviously, I didn’t take this picture, but I thought you’d like to have a bit of a giggle at us.  This is me, H and my husband, with my mum and dad.