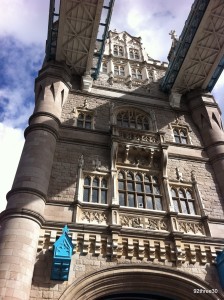 So last weekend we went to London for the day.  We’d been invited to an Invizimals event, but we decided to make a day trip to London of it.  We’d been down at half term, when we attended the Here Be Monsters event and visited the Florence Nightingale museum.  That day H had really enjoyed doing a little sightseeing as we walked from place to place and the Houses of Parliament were a big hit.  This time H particularly wanted to see Tower Bridge.  Our event was at the Barbican so it wasn’t too far away so we went to see Tower Bridge first.  Tower Bridge is well worth a visit.  We didn’t go into the Tower Bridge exhibition and simply walked across the bridge itself.  Half way across there’s a viewfinder which tells you which buildings and places of interest you can see from the bridge.  We spent quite a while looking at this and talking about what we could see.  After that we walked towards the Barbican taking in a few diversions along the way.  Our walk took us past the monument to the Great Fire of London.  This is the Monument that the tube station is named after.  There’s a viewing platform, but we didn’t go up as H is afraid of heights.  He was very intrigued by the fact that the monument is as high, as it is far from the source of the fire in Pudding Lane.

I’d never been to the Barbican before.  I’d been close by when I’ve been to BritMums, but never actually inside the complex.  It’s a bit of an eyeopener.  It’s how all those 1960s tower block complexes could be if only they’d been looked after properly and the money had been there to make it work.  Our event was at the Barbican Conservatory which has limited opening days.  It was an amazing place and a fitting venue for the Invizimals event.  H loved the afternoon from watching the TV series on these big bean bags, through designing his own Invizimals to playing the game on the PS Vita.

Another big part of our week was going to H’s parents evening.  It was no surprise to hear that H is going great guns on reading and maths, but is struggling a little with his handwriting.  I asked what we could do to help, but the teacher only suggested handwriting practice sheets.  I’m hoping to come up with some more exciting ideas to improve his skills as handwriting sheets just sounds like more school work. The picture shows some of the children’s Florence Nightingale projects which they did earlier this term.