Last weekend I decided that I was going to catch up on reviewing some things. I decided that we would make fairy cakes and decorate them with the cake decorating things we had been sent.  Needless to say we didn’t really have all the stuff: we were low on icing sugar and only had muffin cases, not fairy cake cases.  We ploughed on.  Then towards the end of the process it dawned on me that they were ice cream decorating things and not for cakes at all.  Anyway they tasted very nice on our cakes and I have plenty left to try out on the ice cream, but we had no ice cream in the house, so that review will have to wait.  Is it just me who does these things?

On Sunday it was my turn to take H and his friend to rugby training.  Now I’ve been going for several months now and have done various things while the boys are training.  I usually watch them for a bit, then retreat to the car to read, tweet, whatever.  If I’m feeling good (and organised) I go for a run.  This time I thought I would investigate the area round the pitches.  It’s in an area I know pretty well, but I’d seen people walking dogs and there certainly seemed to be a bit of a walk to be done, so off I went.  This is a view of the path which was very pleasant and I did wonder if it was once the avenue leading to a big house or something, given the parallel rows of trees.  I pieced together some bits of local geography, but was left confused by the dog walkers.  To be truthful only the oldest, most decrepit dog would have got enough walking in on that path because it was so short, running as it does between two residential roads. 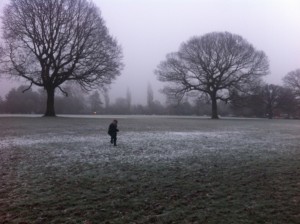 This week the weather took a turn for the colder and the excitement started to build: H was waiting for the snow.  First it was the frost and the ice that had H all excited.  He was ‘skating’ to school.  Less exciting was falling on his bottom when his legs went from beneath him.  Then we had a little snow.  He was off outside at 6.30 in the morning to try out a meccano digger he’d made in the little bit of snow that we’d had that day.  These pictures were taken on the school run.  The little bit of snow seemed to hang around the park and had to be run through on the way to school and back.

On Thursday every forecast said lots of snow and it started to fall that evening, but then stopped overnight.  Friday morning saw a covering of snow, but not enough to cause any real traffic problems.  There was much listening to local radio and trying to access websites, that had fallen over with the amount of visits from parents, across the area, trying to find out about school closures.  Eventually a text came through saying that school would be open and the situation would be assessed at lunchtime, but that any absence would be authorised if parents didn’t feel it was safe to go in.  We got ready for school.  Then the snow started to fall again.

Mid morning we had a text to say that the school would shut after lunch.  This seemed perfect for me: I’d got some work done in the morning and I was happy that H was going to have a chance to play in the snow in the afternoon.  We headed over to our other local park which is well-known for its sledging slopes.  It was a bit early for sledging as the snow was still coming down, but much fun was had until H got cold.