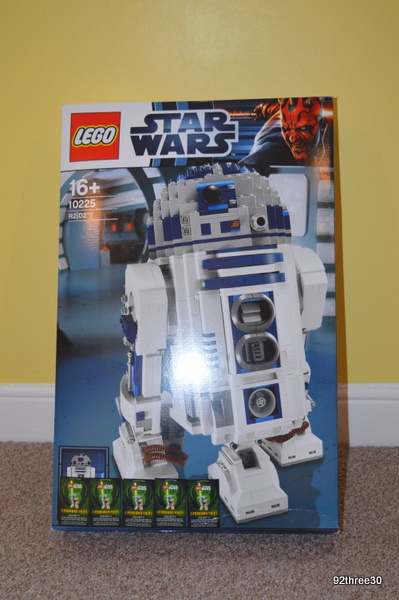 Earlier this year we experienced first hand the way some toys can increase in value over time.  Two years ago I won an amazing batch of toys around Christmas time.  My nieces and nephews had fabulous presents that year and I put aside one or two bits for H (I’d already got Christmas sorted).  He had the brilliant nerf gun for his birthday and I put away this R2D2 in the loft for a future occasion.  Normally I keep H well away from the loft because of what is stored in there (future presents), but over last summer I slipped up.  He spotted it and asked about it. H quickly decided that he didn’t want the set because it was for collectors rather than for playing with.  We gave him a little while to change his mind and then we agreed to sell it and share the proceeds with him.

So we put our Lego R2D2 up for sale.  When I’d won him he’d had a rrp of £149.99.  A little research indicated that he was now worth rather more as he’d been discontinued.  In fact in the end we sold him on eBay for £255. Sadly eBay fees, Paypal fees and postage charges ate into our profit and we had to pay out nearly £50 of that to eBay, Paypal and Parcelforce. That said we’d still made quite a profit on a toy that was only 2 years old. In fact, there is a lot of trade in selling on discontinued Lego sets especially when in new condition, people have even made YouTube videos about it.  H is now keen to buy some of the Lego Harry Potter sets, although he’s not concerned about pristine boxes because he wants to play with it.

Toys from my own childhood are now worth quite a lot.  When H was small I looked at buying some old Fisher Price toys for him and was surprised at the value they had.  Cooperative Insurance have a neat tool to check out how much those old playthings gathering dust in the loft might be worth. Toys will be Toy$ lets you put in the decade you grew up in and check out the prices. It was no surprise that Star Wars toys command a premium, but I hadn’t realised that Space Hoppers were quite so desirable.