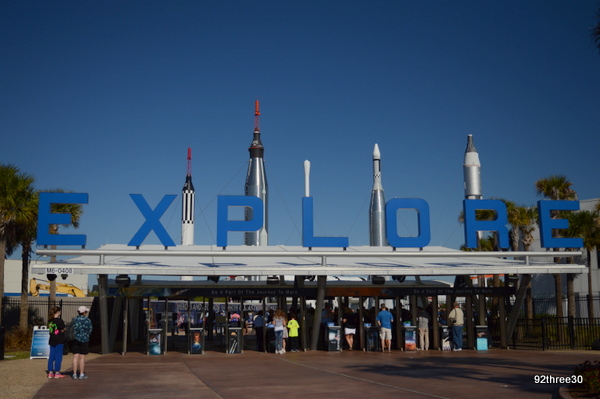 We’ve just got back from a fabulous two week holiday to Florida.  One of the highlights of the trip was our first big day out to the Kennedy Space Centre. Through the day they have a series of talks and shows you can go to and we picked out the Astronaut Encounter as one that we wanted to do.  Basically you go into a theatre and a veteran astronaut gets on stage and talks to you about his or her experience.  There’s an opportunity to ask questions too at the end.

On the day we went Don Thomas was the astronaut that was speaking.  He went into space 4 times during his career and it was really interesting to hear about his experiences.  During his talk he asked the audience a few questions about space.  At one point he put up a picture of the earth with a thin dark blue line around it and asked what the line was.  Someone near to us had put their hand up and Don Thomas indicated they were to answer. I nearly fell off my seat when I realised it was H that was answering (he wasn’t sat next to me as we were visiting with family, so there were a few of us in the row).  H piped up in front of 100-200 people to clearly (and correctly) answer ‘atmosphere’.  I have to admit I had had no idea of the answer, so I was doubly impressed.

After that H seemed to consider his job was done and he didn’t want to ask Don Thomas a question about his life and work in space or how you get to become an astronaut.  H’s day at the space centre did inspire him to consider a career in space, but he doesn’t want to be an astronaut: he says he wants to be part of the ground crew.