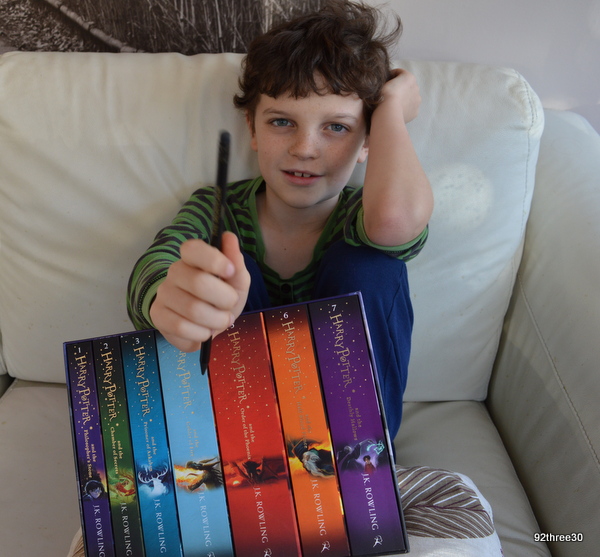 For a few years now I’ve been wondering about when to introduce the Harry Potter books to H.  I was always convinced that he was going to love the books.  Some years ago I read the first book after I picked it up by chance at my sister’s house.  It wasn’t long before I’d read the whole series.  Then again later I picked the first book up again and reread the whole series.  I can see the appeal: it’s the boarding school story (I used to love those St.Clare’s books of Enid Blyton’s) and the magic and the adventure.  There’s so much to like.

The main issue with the books though for a child reading them now is that they progress. This wasn’t an issue when they were published, as they were coming out at intervals, so their audience was growing older with each book: the readers were growing up alongside Harry, Ron and Hermione. Now other writers get round this problem by keeping their characters the same age: The Famous Five have 21 adventures, but they are still all 10-12 years of age.  It’s not so easy with a novel series based around a school.  You have to move through the school, the characters have to grow up. As the books go on the storyline does get darker.  The dark arts come to the forefront of the story and there is less of the light-hearted stuff: there are no quidditch matches in the final book after all.  Any child reading them now, if they get hooked and they probably will, will be reading them back to back.  So if they start reading the books at 8 they will finish reading them at 8, rather than the 18 they would have been if they had been reading them as they were written.

In the end H decided when he was going to read the books for me(he’s in Year 4 and is 8 years old).  He came back from school one day in late September with a copy of the first one, Harry Potter and the Philosopher’s Stone, as his reading book: his choice. The first book is very easy to read: it’s fun, it’s exciting and it’s fairly light.  Yes, Harry does come up against Voldemort, but it’s really not that scary.  H loved that one, so we got the second one lined up ready to read.  This is where things became a bit unstuck.  Now I wasn’t expecting a problem with the second book: Harry Potter and the Chamber of Secrets. To me it is similar to the first one in many ways, although the story is obviously different.  H was quite close to the end of this and was reading it just before bedtime and he was too scared of the creature in the chamber of secrets to go to sleep.

Now H didn’t want to stop reading the Harry Potter books, but we couldn’t have a situation where he was too scared to go to sleep again.  So we agreed that he wouldn’t read the later sections of each book near bedtime.  I was reading the books (again) alongside H, so I was able to gauge how scary things were.  Generally, things didn’t get very scary until after he’d got to Hogwarts each year, so the early sections of the book were safe to read.  In fact, these precautions were unnecessary.  H didn’t find the books got scarier as they progressed at all.  He still finds the second book the most frightening.  I think it might simply be that some of the darker aspects go over his head at this stage.  He found the unknown creature hidden beneath the school much more worrying than Voldemort’s cronies taking over the Ministry of Magic and all the tyranny that went with it.  I think that each child might vary a bit, but I would really recommend the series as reading.  For us they have meant that H has really taken a leap forward in terms of the type of book he was reading.  Prior to Harry Potter he wasn’t that keen on chapter books, unless they had plenty of pictures or lots of action.  Now he isn’t daunted even by the 800 pages of Harry Potter and the Order of the Phoenix.

Some suggestions to follow if your child is keen to read the Harry Potter series.