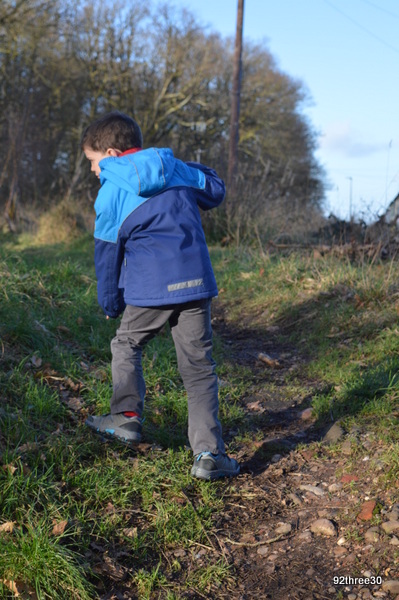 H has been a member of cubs for a couple of years now, but I’ve struggled to get him interested in attending anything outside the usual meetings.  He’s said no to camps and church parades, litter picking and bag packing, football and competitions.  It seems a bit of a shame.  Then we had a letter about a cub hike with his pack and it all fitted: a weekend he could go and activities during the hike that he would like.  So I started off from the assumption that he was going and whilst there was a bit of wavering because he didn’t know who else was going, he went along with it.

It was a bit of a strange one as it was a hike from cubs (which is about 3 miles away) to the park, that we live very close to, for some pioneering activities.  It did seem a bit odd to drive him to cubs and know that he would be walking back nearly to home.  It was a long day: they were out from 10 till 4. H walked over 6 miles and that was over city streets for the most part.  Then he took part in the activities: they did shelter building and things like that.  What made it for him was that one of his best friends was with him all day.  His friend is a bit older than him and he’s in scouts, but it was supposed to be a joint activity (although this boy was the only scout who turned up).  I’m really impressed that H walked all that way and was still cheerful at the end of it.  He was tired and he was still tired the next day as he seemed to crash about lunchtime. It’s nice to have a big walk like this under his belt and it will help towards a badge he’s working on.