H is 8 and up until yesterday, he couldn’t ride a bike. We’d tried riding a bike with stabilizers; we’d tried taking the pedals off to create a balance bike; we’d done everything we could think of to try to crack it. It had all failed and H’s confidence was suffering. I thought there must be someone out there teaching children to ride bikes. We couldn’t be the only family who had experienced this problem.

So I had a look around the web and came across Lisa Costa, via links from two local council’s cycling pages.  Lisa has some impressive testimonials on her site, including one from Chris Boardman. After reading these and speaking to Lisa on the phone, we decided to go ahead.  Lisa said that she would provide bikes and helmets, but encouraged us to bring along our existing ones too, so she could check them and provide advice.

As H’s confidence was low, he was a bit worried about the session beforehand.  We did our best to reassure him and told him we were getting a professional in to train him.  Lisa did her best to put H at his ease from the very start and he soon responded to her. Lisa first made sure that his bike was the right size for him.  She pumped up the tires and sorted out the brakes.  We had thought the bike was too small, but it soon became clear that it was a good size to learn on, once the height had been adjusted to the max.  H was happy to be learning on his familiar bike and it was now fit for purpose.

We went with Lisa to a nearby disused car park.  As there was no traffic, it was a safe environment to learn in.  It was mostly flat and the surface was pretty even, which helped too.  We’d previously tried learning on grass and on a slope and H has fallen a few times.  This time he didn’t fall at all.  Lisa teaches on a one to one basis, so H got all the attention.  As parents we were there to encourage and to understand the key points to focus on for the future. 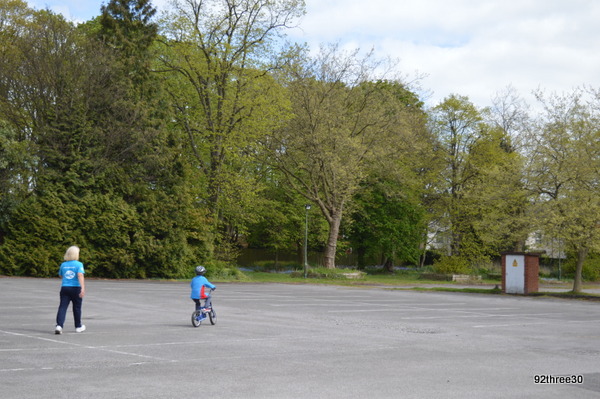 In a series of steps Lisa worked to build his skills and confidence.  Once he’d mastered one skill, she took him onto the next.  He got to grips with his balance and then added she added pedalling.  She covered learning turning and starting off. Lisa is a great sports coach, she was always positive.  When H encountered problems, she showed and told him how to correct them (and he did correct them).  When he succeeded, she praised and encouraged.  She never let him get frustrated.  If he was struggling with a skill, she helped him improve.  She seemed to recognise when he was getting tired and built in some short breaks, so he could get a drink and a snack to keep him going.

Within two hours H could ride a bike.  He had gone from having no confidence and no balance to being able to ride around secure in his abilities.  He learnt to turn as well as ride in a straight line and he learnt to be able to start off from a standing start.  We were really pleased with the training and the outcome, plus it was well worth the money.  In fact, learning to cycle has cost a good deal less than learning to swim and getting expert help was money well spent .

After the lesson Lisa gave us advice on the best size of bike for H.  His current bike is a 14″ wheel one, but he will need a 20″ wheel one soon.  He tried her 20″ wheel bike out and it did look a good size for him, but we can use our existing bike for a bit longer, while we build his skills and stamina.  She also suggested a helmet size and recommended cycling gloves to help avoid blisters.