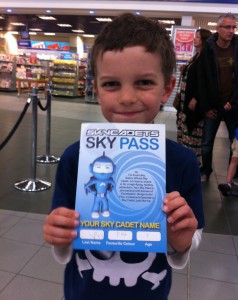 Yesterday we went to Birmingham Airport for the day to try out their summer holiday activity programme for young travellers: Skyside.  Birmingham is our local airport and the one that we are most likely to choose to fly from when we have the option.  So it was great to see them really embracing the idea of entertaining children while they work their way through the boring, but necessary bits like check-in and security.  Plus they’re provided lots to do once you’ve got through to the departure lounge.

Each child travelling through the airport during the summer holidays will be given a Sky Pass at check-in. It’s a free activity which is always a bonus. The sky pass contains tasks, games and puzzles that will help the children earn their Sky Cadet ‘wings’ and enable them to gain access to the Sky Zone.

H loves anything that involves a treasure hunt, searching for clues, finding things, etc.  so he was very much up for completing the tasks in the Sky Pass.  There are also some extra quiz questions on the walls in places where there might be queues (like waiting to go through security).  The booklet was pitched just right for him to complete with minimal assistance (he’s a 6 year old that can read well).  He would have enjoyed doing it with some help when he was younger.  There are a number of puzzles to do in the book which can be done while waiting.  There are also letters to spot on the floor which start in the check-in area and continue through to the departure lounge.  Together the letters spell out the password to get into the Sky Zone.  To complete your sky pass, you collect stamps from shops in the departure lounge.  Zoom, the Sky Side mascot, is hidden in various stores and if you find him you can claim a stamp from the shop assistant.

The Sky Zone area is located near the gates that are most often used by holiday flights, so it’s conveniently placed for most children that will be travelling through the airport.  So children can play here until their flight is called.  There’s lots to do here and it’s a bit different to some of the usual offerings:  no soft play area here.  There are touch screen tables with an enormous range of games to play either alone or with a friend or parent.

For plane fans, there’s a gazing station where you can watch the aeroplane activity outside.  There’s a storytelling zone which has a RSC actor leading a Peter Pan acting and storytelling session on a Friday.  The rest of the time there are children’s programmes on a screen (these are suitable for very little ones).

H enjoyed playing with the interactive floor projection mat.  This is great for playing with others too.  He joined forces with other children to stamp on bugs or trample scuttling crabs.  We both enjoyed playing with the music light beams where you can play anything from classical music to doing your own DJ mixing.  There are quizzes for older children which are quite stretching testing their knowledge of the world, flags, etc.  We also enjoyed doing the buzz wire together.

As we were leaving, H was asking when we could come back – he’d enjoyed it that much.  We spent over an hour in the Skyzone itself and all the children there would happily have stayed much longer.  Skyside will be running until September to cover the school summer holiday period.