I love the idea of creating new dishes for my family to enjoy, but often it proves to be more stressful than fun.  First you need to find a nice recipe; then you have to source the ingredients; then you need to find a suitable evening to try it; and so it goes on.  In the past I’ve said to myself I should try something new each week, but the enthusiasm for doing that quickly fades.  That’s why I liked the idea of the Riverford Recipe Boxes because they’d take a few of those steps out of the equation and hopefully make the experience a lot less stressful.

I ordered a box of 3 quick meals from Riverford.  You can also order vegetarian or original, but quick is what I need when I am trying to cook between getting back from the school run and getting on with whichever evening activity we are doing that night.  As you can see it all comes neatly organised and everything is provided except for salt, pepper, olive oil and water (I can manage those).   Each meal comes with a detailed recipe card with an ingredients list and full instructions.

First up I tried making the Warm Bacon Salad and this proved easy to make.  We’ve tried bacon salads before and they are a great tasting way of making salad fun.  This one was a bit different because it included blue cheese, pears, walnuts and the potatoes were seasoned with rosemary. It was a bit of a revelation to me to use pears in a savoury dish like this and to fry off our (hard) pears to soften them up a little. I liked that some of the stronger ingredients could be added towards the end or easily omitted.  So I made this up for H without the walnuts and the blue cheese, whilst Mr Nine to Three Thirty had the same, but I left him to add blue cheese to taste.  Me on the other hand had the lot and loved it.

Mr Nine to Three Thirty cooks at the weekends usually so he was next to try out the recipe box.  He usually goes to the shop at the weekend to buy ingredients, so having everything in saved time.  He made the Lemony Chicken with Leeks, Dill, Parsley and Capers.  It did take a bit longer than the suggested 30 minutes to prepare and cook, but the recipe was easy to follow.  The dish was very lemony which made it a big hit with H who loves the taste of lemon.  I think our version was a bit more soupy than the recipe card suggested the finished dish would be, but that wasn’t a problem. 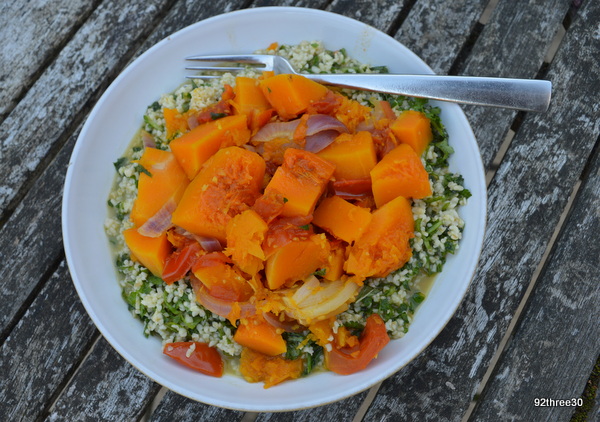 Finally I made the Fragrant Squash and Tomatoes with Green Herb Bulghur Wheat.  It did take me quite a bit longer than the 35 minutes preparation time suggested, even bearing in mind that I was cooking for more than 2.  I think I’m just not as fast at preparing veg as the Riverford chefs.  Mr Nine to Three Thirty liked this one in particular because it was really low in calories and as we ended up with a bit left over, he volunteered to finish that off.  I’d not tried using bulghur wheat before, but it’s so easy to prepare: just add boiling water, cover with cling film and leave for 20 minutes.  This was a tasty vegetarian dish and very healthy too.

Overall I’m loving using the Riverford Recipe Boxes.  It’s very easy to make new things and try out recipes, you probably wouldn’t have thought of before.  These recipes all use a lot of herbs and that added so much flavour to the dishes.  I did find it difficult to match the timings, so I’d allow a little more time, but the recipes are easy to follow.  Most of the ingredients are measured out to the exact amounts for you, but one or two require you to use half a packet, so you might end up with some extra herbs left over, but I’m scheming ways to use them up.