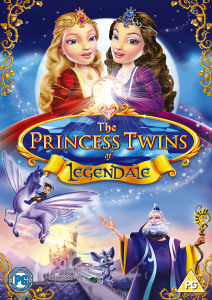 Enter an unforgettable world of adventure full of princesses and fairies now that The Princess Twins of Legendale has arrived on DVD (released 3rd November) from Lionsgate Home Entertainment. In the magical land of Legendale, the two brave sisters must come together to reunite two worlds that have been separated by an evil enchantment.There’s music from award-winning songwriter, producer, singer and former American Idol judge Kara DioGuardi and the film features spectacular CGI animation.

The Princess Twins of Legendale is brought to you by MGA Entertainment, who created Lalaloopsy™. Sheltered in the land of Eternal Daylight, Princess Dawn dreams of a world beyond the palace. Certain the forbidden Night World holds the key to her past, Dawn embarks on a mystical moonlit adventure and discovers that the two worlds were divided by an evil sorceress. The kingdom’s only hope is revealed when Dawn encounters her twin sister Eve and they realise that they alone hold the power to unite the kingdom.

If you like the sound of The Princess Twins of Legendale, you can try your hand at winning one of two copies with Nine to Three Thirty.

1. No bulk, third-party or automated entries.

2. Entrants must be UK residents aged 18 years or older.

3. The winners will be chosen by a random draw.

5. Promoter is responsible for fulfilling the prize and full contact details of the winner will be passed onto the promoter.