At the weekend we were invited to Warwick Castle for a screening of Journey to Dragon Mountain. Journey to Dragon Mountain is the first feature-length film from Mike the Knight.  Mike’s father, the king, returns from travelling to faraway lands, but he discovers that the Vikings have stolen a treasured crystal jewel from the dragon of Dragon Mountain. It is the King’s mission to return the jewel and he plans to complete his task alone, but Mike and Evie have other ideas. The King, Mike and Evie form Team Family Glendragon and their quest is filled with dangerous obstacles from meddlesome gargoyles to giant dragons.

Mike the Knight: Journey to Dragon Mountain is a fun film which both H and I really enjoyed.  H still loves the Mike the Knight series and he was keen to see the latest episode from Mike and his friends.  It’s great to see Mike on a longer adventure with more chance to practise his knightly skills. 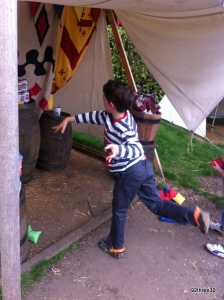 Mike the Knight is at Warwick Castle again this coming weekend and you can get the chance to meet Mike and take part in various mediaeval missions. H found this a lot of fun and enjoyed the hobby horse racing at Galahad’s Gallop and tried his hand at the Blacksmith’s Horse Shy.  There’s so much to do at Warwick Castle, it can be hard to fit it all in.  This time we did the rampart walk; explored the magnificent state rooms and watched the stunning falconry display.