Save at Drayton Manor

As regular readers will know we are Drayton Manor ambassadors and regularly visit the park for some summer fun.  This year they are offering up to 40% off ticket prices if you book 7 days in advance, so it pays to be organised for the summer holidays. They also have a new attraction called Vertigo for those dare devils that like the high ropes.

Did you love the i-SPY books as a child?  I certainly did and enjoyed the challenge of ticking off as many items as possible.  I’ve used them with H too, as they are a great way to make a long journey go more quickly.  I remember well an occasion, on a train, when a three-year-old H excitedly said ‘there’s a steam engine’ (one of the items to tick off) and I said ‘don’t be silly, it can’t be’, only to eat my words when I realised that we were passing a puffing steam engine standing stationary near the National Railway Museum in York.

The books have just been updated and relaunched. I’m loving the slightly retro feel to the covers.  Inside there are clean lines and each thing to spot comes with a little bit of information.  I’m very much liking the less cluttered look of the pages, which I think makes the new style books easier to use and to find the things you are looking for.

We were sent some of Garnier Ambre Solaire’s Easy Peasy Kids range to try out: Anti-Sand Spray and Wet Skin Lotion.  Now we aren’t going to be able to put the Anti-Sand Spray through its paces for a while yet due to the sad lack of a nearby beach.  We have been able to try out the Wet Skin Lotion though. I love that you can apply this whenever you are able to catch hold of your child and keep them still for a moment.  Not having to towel dry skin first does save time and hassle and it seems to be effect too.  In fact, it contains two hydrophillic gelling agents that make it water-resistant and there’s a SPF of 50 which is perfect for hot days when they are in and out of the pool. I have to be honest I tend to prefer sprays for ease of use, but sometimes a lotion is better as it lets you more easily target key areas.

The Anti-Sand Spray has a light mist and an easy 360 degree application.  If it delivers on its promise to stop sand sticking to suncreamed skin, it will be a useful addition to a parent’s beach bag.  Both products are available from Boots.

Return to the Isle of the Lost 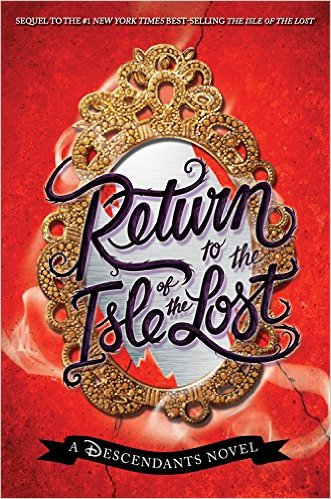 We previously reviewed the prequel to Return to the Isle of the Lost and we have been looking forward to the next installment.  One of the things I love about this series is that it is about a mixed group of children, so it can appeal to both boys and girls.  That said, I do think the picture on the front of this one would put some boys off with its ornate mirror, but if they can get past this there’s a thrilling adventure book inside that will pull them in.  The last novel spent 37 weeks on the New York Times Bestseller List and 15 of those at the number one spot, so I think you will understand how popular this series is with tweens and teens.

Recently I’ve been handing out ecover Washing-Up liquid samples to other mums locally.  I thought I’d tell you a little bit about the product I’ve been spending so much time on.  I’ve been using ecover products for ages and I’ve generally found them to be effective.  I love the fact that they are better for the environment than the average product.  One thing I’ve found out about washing up liquid is that most brands add a foaming agent to give us all that lovely foam, but what they don’t tell us is that it isn’t very easy to rinse away, so we are probably picking up some of that into our food off our supposedly clean plates.

We regularly work with Parragon Books.  In May, they announced the launch of ‘Paper Rocket’, their new imprint for young adult fiction. The imprint will feature an exciting array of both Disney and Marvel fiction titles for tweens and teens. The fantasy, thrillers and illustrated novels, written by best-selling authors such as Stan Lee and Margaret Stohl, will be made available for the first time in the UK under Paper Rocket. They sent us their first title from the new imprint: ‘Twisted Tales: A Whole New World‘ to take a look at.

It’s the first title in a series that puts a twist in much-loved tales, exploring what would happen if key turning points did not work out as planned. So in this book there’s a bit of a spin on Aladdin and considers what would have happened if he never found the lamp.  In this tale Jafar is in possession of the lamp and determined to break the laws of magic and gain control over love and death, the deposed Princess Jasmine and Aladdin must unite the people of Agrabah in rebellion to stop the new power-mad ruler. But their fight for freedom soon grows costly, threatening to tear the kingdom apart.

This is a book that H immediately wanted to read and he was drawn into the story.  Liz Braswell is an award-winning author and she knows how to deliver a story.

If you are want to decorate your home for the Olympics, host a Games themed party or simply do a few topical art activities, then it’s worth checking out the free printables at Tinyme.  They have some really fun ideas, so it’s bound to be a lot of fun.