Ironing.  I struggle with it.  I love sliding into freshly ironed bed linen, but hate the process of making my sheets smooth and flat.  I’m not happy unless my clothes are ironed, but would rather not do the hard work to get them that way. 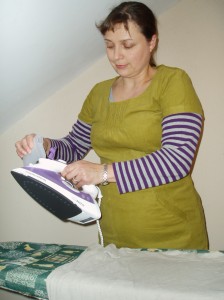 The breeze is a well-balanced iron that feels comfortable to hold and it glides smoothly over a range of fabrics.  It’s an effective dry iron that works well with the steam function too, especially the crease boost function.  I was pleasantly surprised how well it ironed, despite its light weight feel.  There were no dripping water problems and the water reservoir tank is easy to fill.  The cord is a good length too.

The downsides for me were the lack of an anti-scale cartridge, so using tap water could be problematic (in fact, Morphy Richards recommend using 50% tap water and 50% distilled water in hard water areas).  The other issue was that whilst the water tank is pretty generous for a steam iron with a 300ml capacity, it’s not a patch on having a steam generating iron with a large reservoir.

I think the Breeze is a good iron for someone who doesn’t do a lot of ironing.  It doesn’t take up a lot of room so that could be useful for those with space limitations.  The price is very reasonable (rrp £19.99) too, so it would suit those looking for a reliable, effective iron on a tight budget.  Has it dragged me away from my steam generating iron?  Truthfully no, but I’d have no hesitation recommending the Breeze for those don’t iron large amounts each week.