Over the last couple of years I’ve taken part in a project 366 (where I took a picture every day for a year) and a project 52 (where I took a picture every week for the year).  This year I’m not being quite so formal about it.  I plan to take pictures every day, in fact rarely a day passes when I don’t.  The idea is that I will pick out some of those photos each week to tell the story of the week.  There will also be at least one photograph, but often there will be more.

So what have been up to in this first week of the year.  H loved his onesie day last week and he was keen to repeat it, so he did on New Year’s Day.  Here he is complete with elf hat, onsie and Lego Star Wars book.  Another similar shot taken around the same time is this week’s Saturday is Caption Day shot. 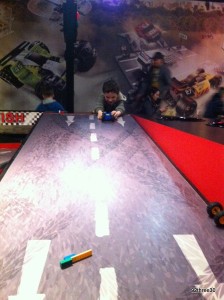 Thursday was a fun day.  We went to Legoland Discovery Centre courtesy of Carcraft.  H loves it there and we had a lovely time playing, building, racing, watching.  I only wish it was a bit closer than Manchester.

Friday wasn’t nearly so much fun.  We were up at the crack of dawn to go on a day trip to the Welsh coast.  The trip had been planned weeks in advance, but it was the wrong day for it.  I drove home from the train station with a sobbing child, disappointed that he wasn’t going to get to see his friends.  We were sad and concerned later in the day to see the pictures of what had happened to the seaside town we had been due to visit when it was hit by a tidal surge.  Thankfully our friends and their home were safe and we’ll have to go another time. The upside was that we did then arrange for H to see his cousins, which was fun.