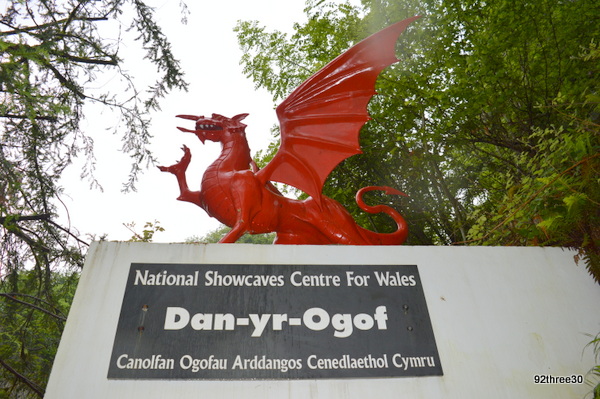 On a recent holiday to Trecco Bay, Porthcawl we went to Dan Yr Ogof to visit the caves.  It had been raining all night (I think) and it was forecast to be wet most of the day, so it seemed the perfect day to spend some time underground.  In fact, we discovered that it was the perfect day to visit Dan Yr Ogof as the caves are more spectacular when there is a reasonable amount of water coming through them.  Also the attraction lends itself quite nicely for a wetter day and it’s certainly a good choice of destination for a showery day. 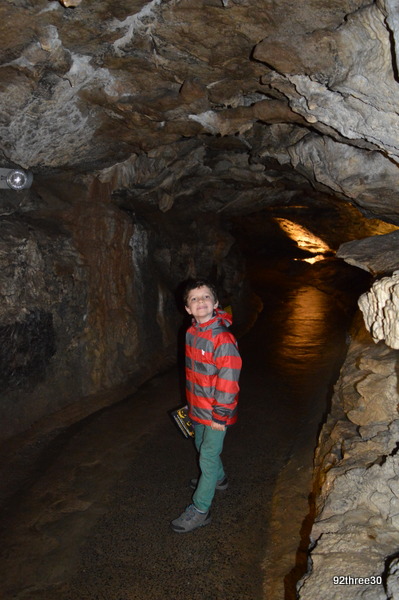 We arrived at Dan Yr Ogof and went into the first set of caves which were discovered by the Morgan brothers, local farmers, about a hundred years ago.  You walk around the cave complex on a one way route.  Head height is good and it’s an easy walk for the most part, although very little ones will need to hold onto an adult in places.  I would recommend wearing decent footwear (we wore walking boots) and a waterproof isn’t a bad idea either (there was a lot of water coming through the caves, but we only got slightly splashed by spray, so you shouldn’t get soaked). 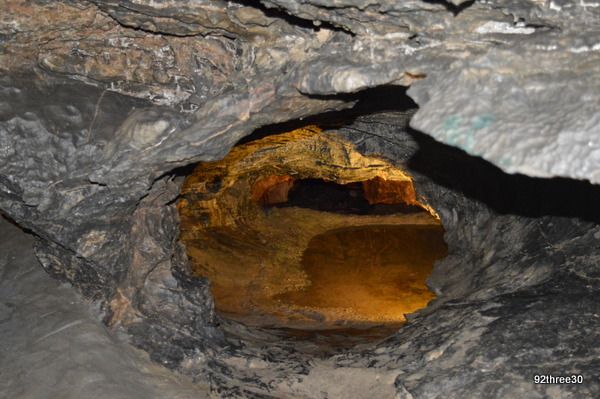 There are lots of different rock formations and things to see as you walk through the caves.  Key things to look out for are the Rasher of Bacon, the heavenly Angel and the Alabaster Pillar, but you’re unlikely to miss them because they are well signposted.  As you walk through there is audio commentary.  This didn’t really work for us as we always seemed to come in halfway through a particular piece of narrative, but we picked up most of the history behind the caves’ discovery. 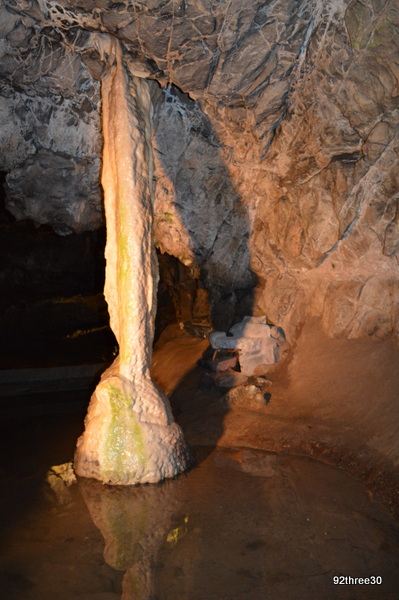 H is doing a lot of work on rocks this term (he’s in Year 3) and this was the perfect place to see a lot of that rock formation and erosion in action.  Models explain how the caves are created and there are stalactites and stalagmites a plenty.  One of the most spectacular was this pillar formed when a stalactite and a stalagmite meet and merge.

Next we went onto the Cathedral Cave.  As the name suggests this was the most spectacular of the caves in terms of sheer scale.  Classical music played as we walked through and the water streamed through various openings.  It was a great sight. Next up was the Bone Cave for which you need to wear a hard hat.  Most adults will need to bend their head a little to get into the cave.  In the Bone Cave we learn about how animals and people have used caves for shelter through history and pre-history.  The Bone Cave is named because they found 42 human skeletons from the Bronze Age in the cave and there’s been a lot of evidence of human activity unearthed during archaeological investigations. 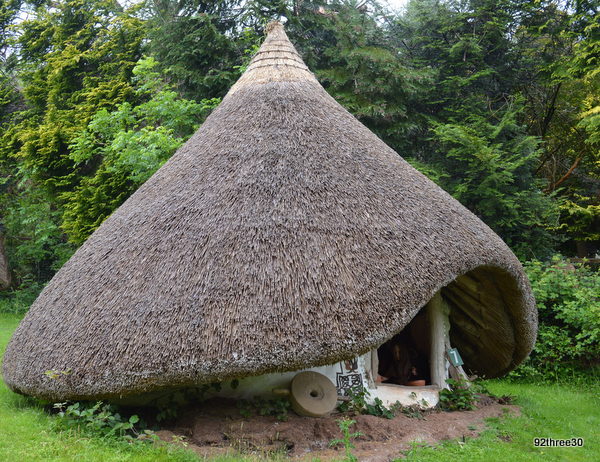 Following on from this Bronze Age connection, you can step forward a little to the Iron Age Farm which you can see on the site.  You can’t walk around it, but we spent a little while talking H through the various features.  The only downside was that information board was rather strangely sited and you kept having to move between the board and the point where you could see all the numbers.  That was easy enough for us to do as it was a quietish day and there weren’t too many people around. 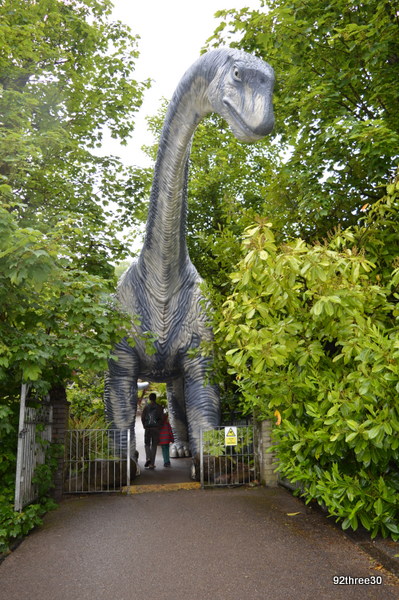 Throughout the site there are life-size models of dinosaurs and they really seemed at home there.  On the day we visited the tops of the neighbouring Brecon Beacons were in cloud and up on the tree-lined slopes of the site, there was a real primeval feel to the landscape. H doesn’t read as much about dinosaurs as he once did, but he considers himself a great expert and he loved seeing all the dinosaurs.

There’s a little museum covering dinosaurs, rocks and the history of the site.  Included were some nice interactive things to do like this dinosaur feature where you can colour in your own dinosaur on the screen and then email your finished masterpiece to yourself. 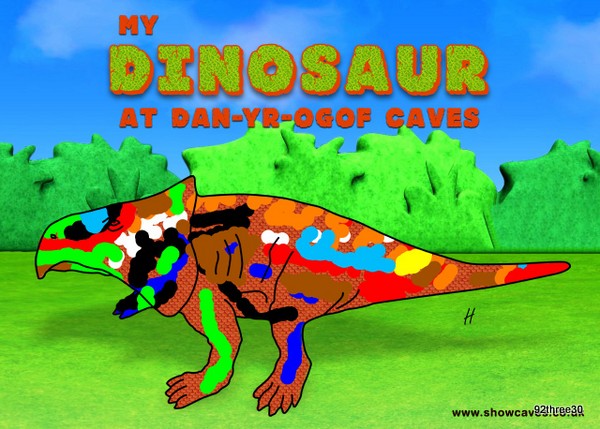 As it was a wet day we had decided not to bring sandwiches and we had our lunch in the cafe.  H particularly liked the fact that he could have dinosaur and chips for lunch. The food was nice – I really enjoyed my jacket potato with chicken mayo and bacon. 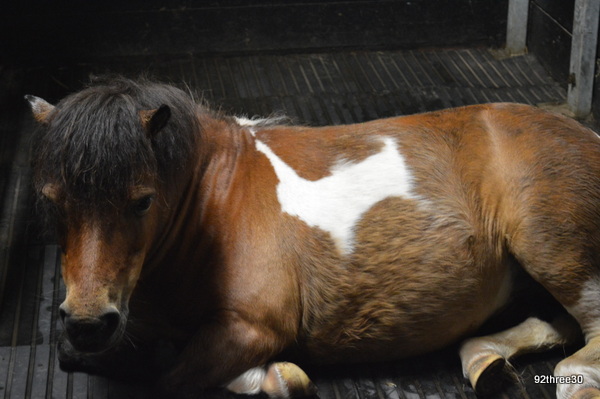 To finish off we went over to the Shire Horse Centre to visit the shire horses and Shetland ponies.  They did have some indoor play places on this part of the site, but they weren’t open on the Saturday that we visited.  There was a new crazy golf course that looked about pretty much ready to open too.  It looked a lot of fun and H was desperate to have a go because he loves crazy golf, but that will have to be one for another visit.

There are some other attractions on the site like the Fossil House and the Stone Circles, so there’s plenty to fill a full day out.   We’d certainly visit again if we were in the area as we very much enjoyed our visit.