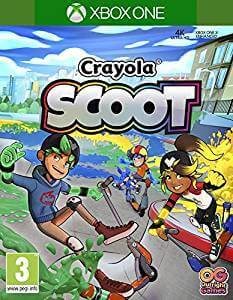 To begin with H (11 years old) thought this game, Crayola Scoot, would be similar to Splatoon, but it turned out to be more of a cross between that and a Tony Hawk Pro Skater game with something a little different thrown into the mix.  The concept is that you in Crayola Scoot are a newbie in Colour League, a big scooting competition.   In this game by completing story mode missions using your scooter skills, you climb the ranks of the Colour League and attempt to reach the very top.

The game uses a large, but simple range of controls, so they are easy to learn and use. You start off using the character creator to create the character that you are going to be in the game. This is fairly simplistic and you aren’t allowed to do much more than pick a gender, skin colour, and “splat colour” which is basically this games ink in the form of melted crayons.  There are lot of pieces of clothing to unlock such as helmets, tops, and bottoms. Unlocking clothing means levelling up by completing events in the Colour Cup and defeating other characters.

Crayola Scoot is easy to master as a game because it uses lots of the same buttons for different tricks.The game is a little repetitive as the limited amount of game modes don’t allow for a lot of variety.  However, you can counteract this by trying out all the tricks of the game that you want in the Skate Park (which is in the lobby of the game).  You gain experience points by completing contests within the story mode.  When you level up, you will be challenged by another contestant in the Colour League (a NPC – non player character).

Crayola Scoot has a number of features including these ones:

If you’d like to see more of the game, take a look at the trailer.

One of H’s highlights of the game include Trick Run as you can perform crazy trick combos and get rewarded for it.   H thinks this is a fun game and he could see himself playing it with friends.

It’s not the most expensive game on the market which is good news as it can be expensive to get enough games to have a reasonable range to pick and play from.

You can buy Crayola Scoot from 2nd November 2018 for Switch, Xbox One, PS4 and PC.
We received a free download of this game for the purpose of this review, but all opinions within this post remain our own.