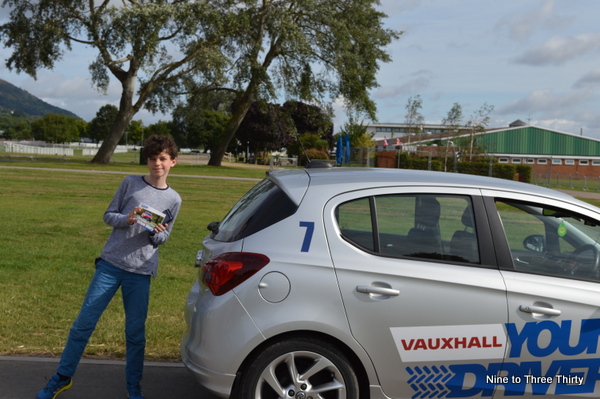 Last year H had his first Young Driver lesson last year (and his second for that matter).  At the time I wrote a review of his Young Driver experience, which instilled a new respect for the skills of the driver in the family (that’s me), as well as teaching him valuable skills for the future.  H was surprised how difficult driving was: I think he thought you just turned the key and drove off, moving the steering wheel when you went round a corner or negotiated a bend.  Despite finding there was more to driving than he expected, he quickly made progress.  His first lesson was for half an hour and he was able to drive the car around the instruction course within a few minutes of the class beginning.  His second lesson was for an hour and it helped consolidate on that progress and he worked on mastering the basics like moving off, steering, gear changes, etc.  He came out of those initial lessons really pleased at what he had achieved.

Young Driver asked us earlier in the year if we’d like to work with them again and I jumped at the chance of H doing a short course of lessons.  He’d enjoyed it so much the first time, so I was a bit surprised that he was a bit nervous about going again.  A bit of digging revealed that he thought he’d forgotten all he’d learnt and he thought he’d have to start all over again.  He was pleasantly surprised to find that wasn’t the case at all.  Yes, it took him a few minutes to remind himself of what he needed to do, but it didn’t take long at all.  In fact, the lesson wasn’t just about recapping what he’d done before, he was able to move onto new things too.  Each time he has a lesson his record book gets updated and this helps him track his progress.  I think it’s great to have a written record of what he’s covered and his competence levels.  It’s also a confidence booster because he can see how he’s progressed and what he’s learned.

H’s first two lessons had been at the Merry Hill course, which is one of Young Driver’s smaller centres.  We went there initially because it was our closest and most convenient centre.  The course is laid out on an empty car park and it’s great for mastering the basics.   We also went there for the first of our course of three lessons, but it was suggested to us by the instructor that he was ready to try out a bigger centre.  H wasn’t so sure, but he gave it a go.  As it turned out he really enjoyed driving around the proper road system at the Three Counties Showground in Malvern where he went for the next two lessons.  We both really liked going to Malvern. For H there was the chance to drive on a clearly defined road system with plenty of room to practice manoeuvres and to build his skills in conditions as close to being on the roads as is possible for a 12-year-old. There’s a hut with some basic refreshments available and seating, as well as toilet facilities, so there’s somewhere for parents to sit rather than just their cars.  Luckily on the two occasions that we went, the weather was kind and I was able to sit outside on one of the many benches and read my book or look at the wonderful views of the Malvern Hills.

As we have moved around venues, H has had a number of different instructors for his lessons.  He’s found all of them approachable, friendly and helpful.  At the end of the lesson they have all come over and updated me on his progress.  I think this relaxed and supportive approach has really helped H to learn and develop his skills.  H isn’t a natural sportsman and in the past he’s found physical skills (like handwriting) difficult to master. Obviously driving isn’t just a physical thing, there’s a lot more involved that that, but I think the speed of his progress in driving has proved a real confidence boost because he has been able to see himself improving.  It’s been great timing to do that in Year 7 when there’s so much change to get to grips with at school.  The record book has been a key part of this as there is a structure to follow; the instructors update the book at the end of each lesson; and H is given feedback about his skills so he knows how he is doing.  Watching H head off with his instructor for his latest lesson, I was struck by how self confident he seemed as he chatted to his instructor about what he’d learnt before.

Disclosure: We were provided with three free lessons by Young Driver and previously had been given another free lesson to do a review.  The other previous lesson was from Young Driver, but it had come from a gift certificate.  My views and opinions are my own.