Until recently I’d only had a vague awareness of Mornflake as a brand.  I’d seen their products in the supermarket, but that had been about as far as it went.  I don’t think I’d even tried them.  Then I went to the Talk to Mums event in London, where I heard about and met people from a lot of different brands.  It was a great way to get to know brands in an informal setting, but Mornflake was one of the brands that interested me most.

The Mornflake story is an amazing one.  It’s the story of a British family owned business that have been milling oats in Cheshire since 1675.  I think that’s quite amazing: it’s such a long time to have been in business (they are the 8th oldest company in Britain), but to be still family owned and run after all these years is very unusual.  There aren’t many independent, British companies around these days.  They were a big part of the ‘feeding the nation’ campaign during the war and they invented the steam stabilisation of oats which allows them to be stored as an ambient food with a long shelf life.

So I went to Crewe, where Mornflake are based, to find out more about this very British brand.  Once we had all arrived, we were whisked away to a nearby farm into the middle of an oat field.  I can’t say that I’ve ever seen oats growing before.  I’ve walked through fields of grain, but it’s not always that easy to tell what is what.  A field full of oats is a lovely thing and it was good to see the crop being produced. 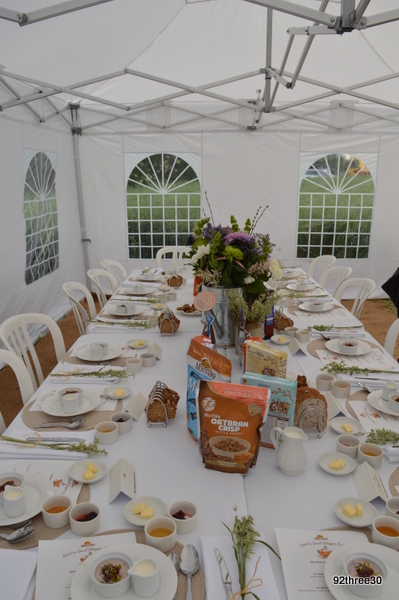 In the middle of the oat field was a marquee set up with a lovely oaty breakfast for us.    The table was very prettily laid and the oats themselves were there as decoration as well as being the focus of the meal.

To start we sampled Bircher muesli.  Many years ago I lived in Switzerland for 4 months and ate it every morning for breakfast. I do like a good Bircher muesli, but so rarely get around to making my own. I should do it a lot more often. There were more oaty dishes to follow: some of Mornflake’s own granola, some homemade flapjacks and oaty soda bread spread with honey from the farm we were on (food miles don’t get much lower than that).

Whilst we ate we learnt about how oats are farmed.  It was great to get a real insight into arable farming and to understand a lot more about how something I eat every day is produced.  Mornflake encourages the farming of oats by ‘contract growing’ on farms in the UK.  This has helped stabilise the decline in oat growing in the UK and as we heard from the farmer, it provides security for the farmer.  After breakfast on the farm, we went back to Mornflake HQ to learn more about how oats are milled and used to produce the various products of the Mornflake range.

We got kitted up in safety gear and went on a tour of the mill.  I couldn’t take any photographs there, but it was very interesting to see how they get separate out the groats (this is the bit of the oat that humans eat) from the straw and other unwanted bits, then how they remove the outer hulls. Considering how much of what is harvested and delivered isn’t used, I’m very impressed that Mornflake only send 0.001% of their waste to landfill.  The farm that we visited has a green waste plant that turns the vegetable material into compost, the hulls are used for animal feed and us humans eat the groats.

Next up was a visit to the factory to see the large granola ovens, the packaging plant and more besides.  Factories like this are fascinating places and all the machines working away reminded me of trips through the arched window on Play School.  Throughout the day though what came through was Mornflake’s passion and commitment to produce good quality, British food product from oats – I very much liked and admired that.