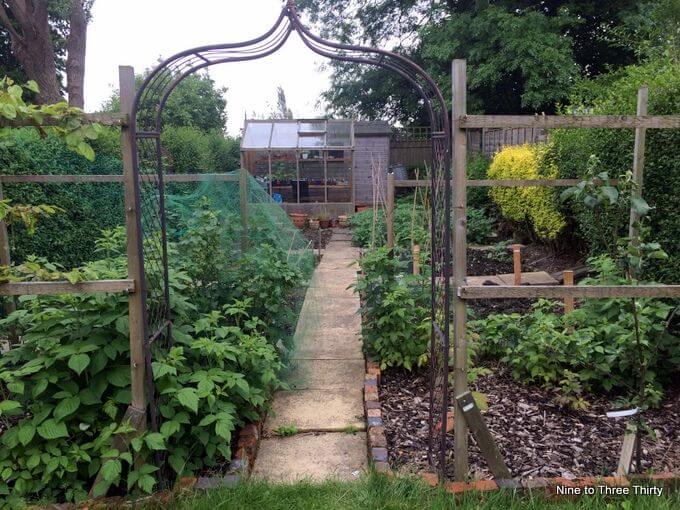 Last weekend I was busy in the garden on Saturday.  In fact, I carried on early on Sunday morning to get as much as possible done before the rain came.  I’m very pleased with how the kitchen garden area is now doing and I have lots of things sown or planted.  If only my flower border was as well-tended, but maybe I’ll get to that this weekend.

Monday morning was a bit of a mare.  H had to take his bike into school for cycling proficiency (now called something else completely unmemorable- why do they insist on changing the names of things?).  The trouble with that was that Monday is cello day and a packed lunch day, added to which it was a back to school after the holidays day so that meant a pump bag too.  I was not impressed to be carrying all of this (plus the usual book bag and water bottle), but I was even less impressed when I discovered that H’s bike then sat around the school until Thursday because they were doing it in small groups and he was in a later group.  Is it just our school that doesn’t think about these things?

Anyway, H loved doing the cycling, when he eventually did do it.  It’s really improved his confidence because he hasn’t really done enough riding to have good skills. We got a coach in to teach him to ride a couple of years ago and I’d really recommend doing that if you have problems teaching your child.

During the week I tackled the greenhouse.  I repotted a lot of the plants I’ve been growing and sowed more seeds.  I’m nearly ready for the tomatoes and cucumbers to go into their final pots.

On Friday H went to his swimming class as usual.  He’s been badgering his swimming instructor for months to do his 400 metre badge and she has kept saying that they all need to be there to do it (understandable because it takes almost the whole lesson).  Anyway this week everyone was there so they had a go.  H was really chuffed to do, but I think it would have taken a lot to stop him because he was very determined.  He was quite tired afterwards, but he and his friends thought they’d earnt an ice cream so we went to the local ice cream parlour on the way home.