Over the last week I have been doing a lot of walking.  It’s partly a new year attempt to get a bit more active, but I like walking anyway and this week there seemed to be more opportunities than usual.  On Monday I went off to my weekly German language class and my route now takes me for a nice walk along the canal.  I find that the canals can often be the quickest way to get somewhere on foot in Birmingham because they seem to follow more direct routes than the roads sometimes do.

On Wednesday I went in to meet up for lunch with someone I used to work with who is taking redundancy.  It was good to catch up with her and some other former colleagues.  I decided that whilst I wasn’t far from the city centre, I would go in to buy H some new school trousers.  He tends to outgrow his clothes around this time of year and not in September for back to school.  This year I have had more trouble than usual finding school uniform: a large supermarket only had an end of aisle display for all their school uniform and a local school outfitters didn’t have a good refund policy, so I was nervous of shopping there.  In the end I decided to go into town to Marks where I had no such problems. On the way in I took the chance to walk through the Mailbox to scout out where I was going for an event on Thursday.

On Thursday I had a bit of me time.  I went for a massage, which I find a good way of relieving stress.  Better still the therapist feels like an old friend now, so it was nice to catch up too. In the evening I went to a restaurant launch event, which I was covering for my foodie blog, A Little Luxury For Me.  It was for Tom’s Kitchen and the food was very tasty. 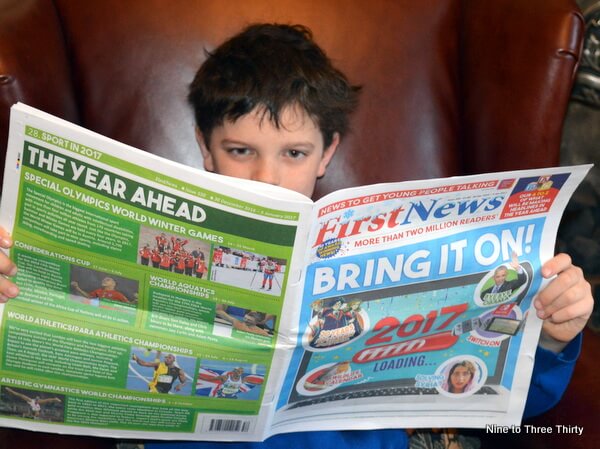 Over the last week or two H has been enjoying reading his newspaper: First News, which we have been testing out.